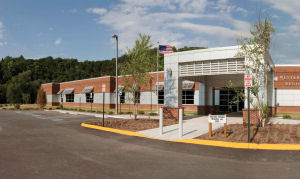 Situated on a 42-acre site in Salem, Va., the new $122 million Western Virginia Regional Jail, which opened in April, stands as a concrete testament to interjurisdictional communication, cooperation, and coordination in tackling the pressures, challenges and constraints facing corrections agencies and elected officials at the local level.

The 605-bed facility, which was developed to provide updated facilities, deliver operational efficiencies and address jail overcrowding and inmate population projections, represents the raison d’etre of the Western Virginia Regional Jail Authority. The counties of Franklin, Montgomery and Roanoke and the City of Salem established the WVRJ to manage planning, financing and construction of the new jail under a 2005 regional partnership agreement.

The WVRJ project is also driven by resource conservation and environmental sustainability, and with the Commonwealth of Virginia reimbursing 50 percent of costs for regional jail projects, compared to 25 percent for a local jail, the joint-facility project represented a win-win partnership for the four jurisdictions.

The local office of architectural and engineering services firm AECOM served as prime designer and supplied civil and M/E/P engineering on the 264,000-square-foot project. AECOM also acted as owner representative on the project with Virginia firm Thompson & Litton providing design services on a sub-consultant basis.

The procurement of project design and construction was conducted under Virginia’s Public-Private Education and Infrastructure Act partnership, which is designed to bring private sector expertise to bear on public projects, encourage innovative approaches to construction and financing, and ultimately save time and money through public-private partnership.

Commencing work in April 2007, the Winchester, Va.-based firm, which has delivered a number of justice and corrections projects throughout the mid-Atlantic region, completed the project in 24 months.

Of the $94 million in total costs for construction and land acquisition, the Commonwealth will reimburse the WVRA for approximately $46 million. The WVRA raised $49 million of construction costs and approximately $30 million for capital purchases, such a vehicles, uniforms, office furniture, dental chairs and medical beds, through short- and long-term loans.

“The state does not reimburse for anything that is not tied down,” says Superintendent Charlie Poff, a 35-year veteran of the jail system.

“It’s a unique facility in that if you build a regional jail, the local jails close,” Poff says. In this case, however, the existing local jails did not close.

The new regional jail was planned as a centralized overflow facility to augment existing bed capacity across the multiple local jails, which were operating at two to three times capacity. Housing mostly sentenced inmates, and some special needs, medical and mental health, and female inmates, the regional jail will function as a hub for the local facilities, which are situated close to their respective municipal and county courthouses and serve their communities, Poff says.

However, participating jurisdictions will administer community-based programming and all custody releases will occur through the local jails.

“You want to keep the law enforcement officers in the community,” Poff says. “We agreed right away to do transportation for all the inmates — picking them up, taking them to doctor’s appointments, and taking them into the Department of Corrections.”

Facility operating costs are shared by each jurisdiction on a pro-rata basis, with 38 percent of bed capacity allotted to Roanoke County, 32 percent to Franklin, 20 percent to Montgomery, and 10 percent to Salem.
“The localities pay a per diem of $30 per inmate per day to hold their inmates here. It is like a user fee,” Poff says.

One of the main benefits of the partnership comes with the joint facility’s ability to handle many medical conditions and deliver services that the existing local jails are not designed or equipped to accommodate, Poff says. Local jails transported inmates to nearby hospitals for medical treatment.

Medical facilities at the new jail include a 32-bed segregation unit and a three-bay dental unit, with a physician and/or physician’s assistant, skilled-nursing care and a mental health practitioner on site five days per week. The medical unit is staffed at all times by registered nurses.

“Our goal is to keep them within the facility,” Poff says.

“Each module was cast in one shot, eliminating the need to bolt or weld any pieces on,” Boehm says. “It was a massive operation, functioning like an oversized assembly line.”

The mezzanined, podular design and housing configuration allowed the project team to deliver the required bed capacity within a compressed floor plan and minimized building footprint, which delivers operational efficiencies and cost savings across a range of areas, including energy and inmate management.

Control stations provide 360-degree visibility to maximize operational supervision. Sightlines, access and movement through and around housing units and pods are augmented through the utilization of mirrored security glazing, access control, and a series of sally ports.

“The central local control station is encircled by sally ports, which control access to and from each of the housing units, while also assisting in the managing sightlines,” says Mark Swecker, lead architect for Thompson & Litton, which provided architectural and structural engineering services.

“The decision — for security and cost-savings reasons — was to have no windows in the housing areas, but instead provide natural daylight via efficient use of skylights,” says John Chaney, project manager for AECOM.

On Point for LEED

WVRJ officials are seeking LEED certification for the regional jail, targeting a total of 30 credits in areas including water and energy efficiency, indoor environmental quality, construction materials and design innovation.

owever, the strategies are projected to yield significant life-cycle energy and operational cost savings, while reducing the environmental impact of the facility, officials say.

Water efficiency and conservation measures, such as a vacuum plumbing system, form key components in the push for LEED certification and are projected to reduce annual water consumption by 20 percent to 30 percent below that of a comparable conventional facility.

Unlike conventional water-intensive plumbing systems, the vacuum plumbing system, by Acorn Engineering, uses air pressure for the transport and discharge of solid and liquid waste.

“It has a life-cycle cost payback of less than one year and, most importantly, will reduce the amount of waste and use of domestic water by 2 million to 8 million gallons per year,” Chaney says.

The overhead pipe installation and remote system monitoring and control limits inmates’ ability to clog pipes and cause flooding or dispose of contraband by flushing items.

“We have total control,” Poff says.

Kitchen facilities include a food-waste disposal system that combines water with food waste as part of a pulping process. A second processing phase then extracts the water from the pulped mush, leaving a solid-waste product of significantly reduced volume.

Approximately 50 percent of waste materials generated during the construction phase were diverted from landfill for recycling, officials say.

While the jail has the capacity to double bunk to 805 beds, the facility is master planned to expand rated capacity by an additional 649 beds to accommodate future increases in the inmate population.

“We also added showers in the housing units, and additional space and support areas like medical, food service, laundry and recreation,” Poff says.

Jail officials are working toward national accreditation of the facility by the American Correctional Association.

“There is a lot of work involved,” Poff says. “We put together a 15-person transition team that worked about a year and a half before the facility opened. We wrote our policies in compliance with the ACA and are still working out a few bugs, but in about seven months, we will ask for on-site accreditation.”