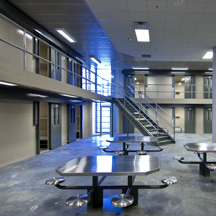 The 250,000-square-foot expansion and renovation project, which was designed by Atlanta-based architectural firm Rosser International, included 213,000 square feet of new construction. The new nine-story jail tower adds 1,008 beds to relieve severe overcrowding and minimize the number of inmates housed in other jurisdictions.
The detention equipment package on the Fort Bend expansion, valued at almost $10 million, covered security hollow metal doors, frames, ceiling and wall panels, decking, mezzanine-level metal stairs and rails, security hardware, furnishings and accessories, plumbing and light fixtures, and security glazing.
The industry veteran — DeMent has been in the business since 1972 — sees expanded project scope as one of the most significant trends in the market during the last 20 years.
“Our scope of work on this project was probably the most comprehensive we’ve ever done,” DeMent says.
DeMent has managed CCC’s Detention Systems Division since joining in 1996 to establish the division, which provides engineering, project management and installation services to support the integration of physical and electronic security products in turnkey packages for new and existing correctional facilities in domestic and international markets.
“The day I walked in here, I was the division, literally, and they gave me a free hand to set it up,” DeMent says.
The Turner quality award is perhaps a timely illustration of a business credo that underpins the division’s initial growth and continued success within a sector renowned for its demanding conditions.
“I started full time in this industry in 1972,” DeMent says. “That’s a long time to have been around and I’ve seen a lot of different firms come and go,” DeMent says. “One of things I proposed when I came here was to capitalize on some of the mistakes that others had made.
“No. 1, we would never take on more work than we could perform well. That sounds like a pretty obvious principle, but it’s amazing how many times I’ve seen people do that in the past.”
The company also determined early on that the division would differentiate itself on the basis of its performance, and follow through on its commitments and obligations to clients and partners.
CCC’s organizational structure, which is set up to ensure consistency of performance, also has a range of protocols in place to monitor work, progress and cost control.
“We have all kinds of project controls in place, including risk analyses or bid adjudications within the estimate, to track projects from beginning to end,” DeMent says. “At any given point in time I can tell you exactly what’s going on with a project, schedule wise, manpower wise, financials.”
In addition, DeMent still makes a point of getting out into the field to gauge job performance.
“I’m looking with a critical eye at what we’re doing, but I’m also looking at what the other trades on the job are doing, which is important for us to be able to do what we need to do when we need to do it,” DeMent says.
Originally founded 1947, the company was incorporated as CCC Group Inc. in 1985 through a statutory merger of its four related divisions.