Featured Articles
September 13, 2010September 13, 2010 997 Views DA Architects, University of Michigan
In the current national economy where funding for social infrastructure projects is scarce, state and local governments are looking for

alternative methods to finance capital construction and renovation projects for correctional systems — which in many cases stay on the drawing board these days rather than getting off the ground.
One funding method that is gaining popularity in countries around the globe is the concept of public-private-partnerships, or PPPs. The 3-P’s, as they are also known, are arrangements where capital is raised through private sources such as banks, institutional investors, private equity funds, and in some cases individual investors, and is used to fund the design and construction of public projects such as roads, railways, utilities, airports, schools and correctional facilities.
In the global corrections industry, Great Britain has led the trend since 1992, using private sector partners for facility design and construction, as well as operations and maintenance. Correctional PPPs of varying models have also been deployed in other parts of Europe, such as Spain and Germany, as well as Latin America.
Here in the United States, at a time when tax revenues are down and the public has grown reluctant to approve additional funding through general obligation bond elections, PPPs are enabling state and local governments to move forward with detention projects needed to add bed capacity or update aging facilities.
Arizona has started to embrace PPPs, according to reports. The state currently operates three in-state correctional facilities under PPP arrangements and presently has an RFP out for the design/construction/finance/management of 5,000 new privately funded prison beds.
Private Finance of Correctional Facilities
Lawrence Goldberg, founding president of architectural firm Goldberg, Sullivan & McCrerey, based in St. Joseph, Mo., has a background in finance and has used it in his specialized prison construction design firm for more than 25 years.
“There’s several different forms of financing and they all have different pluses and minuses,” Goldberg says. “We basically use two forms of financing — bond’s, and what we call structured leases. Bonds themselves are well known. Tax exempt — hopefully double-tax exempt for federal and state — and whether they’re revenue bonds, certificates of participation, whatever they are — they are investment vehicles. They’re not loan vehicles, they are investment vehicles.
“The beauty of a structured lease is that it is not bound by the same regulations the Securities and Exchange Commission requires of bonds,” Goldberg says. “You can structure these things a little differently.” 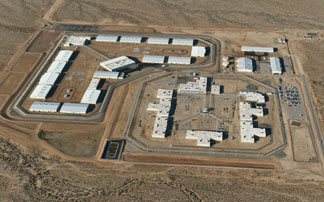 Goldberg added that a prevalent trend now been picking up steam is structuring leases for municipal entities that are broke — designing them in a way that their principal and interest payments start several years down the line.
“For instance, let’s say that a jurisdiction doesn’t have the money to build a jail that desperately needs one — but they would have the money in five years when its community hospital bonds will be paid off,” he says. “Between now, and five years from now, they haven’t got a nickel. But five years from now, when those bonds are paid off, they will be able to free up that money because they will no longer be making that $600,000 per year payment to pay for the hospital — they can make the $600,000 payment to the jail. What I need to do is then structure a lease so that their interest and principal is amortized into the financing so that they don’t make a payment — or maybe they make interest only [payments] after the first two years, etc.
“The point is, their principal and interest payments start in earnest in year six,” Goldberg says. “We’re seeing this more and more as a lot of these bond issues from better heeled times — let’s say 10 to 15 years ago — all come to maturity and some of these funds get freed up.”
Goldberg says that some architectural firms that make projections based only on the immediate construction needs are shooting themselves in the foot — particularly since PPP deals allow for the funding of equipment, operations and maintenance, among other things. He explained the process that he goes through when starting the design of a corrections facility.
“One is determining what they need now, five years from now, ten years, fifteen years from now — as best as you can,” Goldberg says. “The other thing of course is evaluating the existing facility to see whether it can be salvaged, if it can be adapted, re-used and enlarged, or if it is — as it is in most cases — so antiquated that there is virtually nothing you can do with it and you abandon it for storage or something.
Without such planning he says, in spite of all of the billions spent and architects and builders that get involved — “the fact is that only a small number of correctional facilities actually come to fruition.”
Proponents of PPPs say that the projects are completed more quickly and cost efficiently. Government studies of the United Kingdom’s projects found that PPPs lived up to that billing, with more on-time completions and fewer cost overruns.
In the United States, however, where about 18 states have legislation allowing the finance method, the majority of PPPs are structured as tax-exempt lease-purchase agreements, according to Michael Harling, a partner at Municipal Capital Markets Group, a financial firm experienced in public-private correctional transactions.
Using this form of non-debt financing, governments don’t make any expenditures until the correctional project is completed and occupied. An additional advantage, Harling says, is that the agreement is not classified as debt, therefore it is not subject to election requirements or legislative mandates on indebtedness.
An added element to the transaction is that, unlike traditional municipal bonds, financing is not limited to just the construction element of the project. Some projects will include design, construction and operations, and even maintenance, while others choose to exclude one or more of these elements from the agreement.
Investment banking specialists like Harling’s firm assume the role of raising the upfront capital needed for the project’s design, construction and equipping costs.
One common way to capitalize projects is to sell bonds in private and public markets, with a pre-set payment schedule based on the project completion date, Harling says. Generally these transactions are only secured by a mortgage and a pledge of project revenues, and the private investors assume the payment risk. The project’s design and construction team assumes the risks associated with completing the project on time and with the given amount of capital contributed by the investors.
“The transactions are structured so they look, feel and smell like municipal bonds,” Harling says.
PPP financing can also come from a single source, such as the private corporation, or from a group of investors who form an entity that serves as the project lessor, assuming a structure compliant with applicable law, Harling says.

Managing Risk and Efficiency
The entire financial transaction is premised on the government making the agreed payments once the facility is online and ready for use. If the facility isn’t ready for inmates by the agreed-upon target date, no lease payments will be received from the government. The investors will often shift this payment risk to the design/build team.
Hale-Mills Construction, based in Houston, Texas, has completed more than 30 correctional PPP projects.
“We understand the risks inherent in the construction process, which puts us in the best position to manage those risks,” says Kendall Phinney, principal at Hale-Mills.
“The investors must have confidence that the project will be built within the timeframe required in the transaction and for the amount of money set aside for design and construction — period.
In addition to the financial costs of not completing the facility on time, a government may include specific late penalty payments on a per-inmate, per-day basis. A recent Arizona project specified damages of $80 per day for each of 2,000 inmates that the government could not house if the facility construction fell behind schedule. By anyone’s calculation, $160,000 a day is a penalty to be avoided.
That project, a 2,000-bed minimum-security facility in Mohave County was completed ahead of schedule, at no additional cost to the state. [Editors note: the facility mentioned was not the same facility in Kingman, Ariz., where three inmates recently escaped].
PPPs typically include a design/ build project delivery component, Phinney said. Governments contracting the design component separately must manage the contractual obligation and make upfront expenditures for design costs.
For this reason, governments are opting more for a packaged design/ build contract because it assigns both those obligations to the private portion of the PPP.
Once the facility is completed, the inmates are moved in and the government starts making payments. At the end of a specified term — usually 10 to 20 years, but the contract length is negotiable — the government owns the facility outright, Harling says. The negotiable length of the lease provides the correctional industry buyer with budgetary flexibility when structuring the PPP financial package.
Harling adds that the longer terms yield lower monthly payments, but they also create a higher total expense for the buyer over the term.
Another significant feature for the government in some transactions is that it is possible to cancel the transaction for lack of funding during the term of the contract. Typical structures give buyers a window each year where they can opt out. It rarely if ever happens, but this arrangement technically allows the government to work on a pay-as-you-go basis.
The government partner also has a contractual option to cease making lease payments by purchasing the facility during the contract term.
Other Economic Incentives
Arizona’s move to expand its own prison bed capacity will help keep jobs and money in the state, Phinney says.
Since the turnkey PPP system speeds the delivery of correctional space, it brings a faster economic impact with it as well. The jobs are created 2-3 years sooner than if a standard bond program is planned, an election is held and, if passed, the project finally gets underway.
“A facility with 5,000 beds could typically employ up to 800 people a day,” Phinney added. “Governments are finding that it’s inconvenient to have inmates housed elsewhere because it sends money away that could be spent locally.”
Bill Jeffreys is a freelance writer and journalism instructor living in Texas. The staff of Correctional News also contributed to this article.