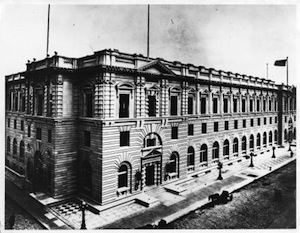 Facing funding shortfalls, 38 projects currently in the pipeline — ranging in scope from a new Central San Diego courthouse with 71 courtrooms to the renovation of one courtroom in the San Joaquin County Juvenile Justice Center — will proceed with reduced budgets, but plans for new facilities in Alpine County’s Markleeville and Sierra County’s Downieville have been cancelled.

Senate Bill 1407, signed into law in September 2008, designated judicial branch revenues to fund up to $5 billion in lease-revenue bonds to finance 41 new construction and renovation projects. The bill created a revenue stream from court fees, penalties, and assessments to finance courthouse construction and renovations, ensuring that the projects would be paid for from within the judicial branch rather than from the state’s general fund.

“It’s considerable, and we really hope that we don’t lose any more because the infrastructure is so key — in terms of access, handicap access, disability access, seismic problems that many of these courthouses have, security problems that many of them have — that we just can’t paper over by modifications. Our modification budget is not enough either. We are finding that some of our worst courthouses are really safety risks, and we need to move forward with those projects,” says Brad R. Hill, Administrative Presiding Justice of the Court of Appeal, Fifth Appellate District.

The cancellation of the Markleeville and Downieville projects — both new one-courtroom courthouses — will save more than $50 million.

“Both of those courthouse are, quite frankly, inadequate,” said Hill. “But in this economic environment, given their caseloads, population, and a variety of factors that we looked at, we just couldn’t support building a brand-new courthouse. That doesn’t mean we won’t be looking at various modifications and improvements within their existing courthouses to make them more safe, secure, and better suited for the public. But we couldn’t just buy a brand-new courthouse.”

The construction budgets of the remaining SB 1407 projects will be cut by two percent, which will result in a total estimated budget reduction of $46 million. Implementing an owner-controlled insurance program will save an additional two percent. The CFWG also formed a courthouse cost reduction subcommittee, which will review each project for ways to further reduce costs without compromising safety or security.

“What we’re doing is cutting across the board, and then we are looking for additional cuts,” said Hill.

The plan allows most projects to proceed as scheduled, although six will be delayed until the start of the 2012–2013 fiscal year on July 1, when revenue collected in the courts should again be available in the account that funds courthouse construction.

“The timing is just altered a little bit on a few,” said Hill.

In addition to construction projects, the CFWG also reviewed funding for courthouse maintenance and modifications, and is revamping its maintenance list to get a more accurate assessment of statewide facility needs. Repair funding was cut 40 percent this fiscal year to $30 million.

A working group is investigating a decentralized approach to maintenance and preparing a pilot project.

The pilot project involves courts of various sizes from throughout the state and not only large courts that are capable of successful independent maintenance from the outset, said Hill. The range will help group “get a feel of what can and cannot be done,” he explained.

More cuts to the facilities’ budgets are not out of the question at this point, and it is difficult to anticipate what next year will bring.

“We sincerely hope that the worst is behind us, but we just don’t know,” says Hill.

Meanwhile, the CFWG’s primary mission over the next four to five months will be the construction cost-saving initiative and finding savings beyond the two percent across-the-board cuts.

Hill is optimistic the approach to cost cutting will be successful.

“Things are going well and, I think, in the right direction,” he says. “Judicial oversight is at its best when you have a lot of judges on the ground working to make the program a better program. We have an enthusiastic group of judges and court administrators, so things are going well.”