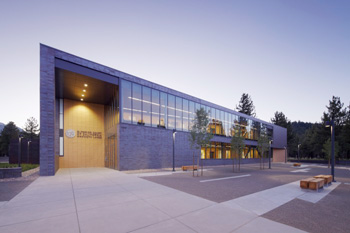 MAMMOTH LAKES, Calif. — The Western Council of Construction Consumers has recognized Mammoth Lakes Courthouse with its top honor — a distinguished award — at its 2012 Owners’ Projects Excellence Awards gala on Oct. 16.

The 20,000-square-foot, two-story building is a major improvement over the former courthouse, which was housed on the third floor of a strip mall. The facility was completed in 16 months under an aggressive schedule to enclose the building before the first big snowstorm in the winter of 2010-2011.

The new courthouse is the first unit on acreage that will one day become a government center in the south county.

Completed on time and under budget, the Mammoth Lakes Courthouse is designed by Mark Cavagnero Associates. It utilizes a steel frame structure and exterior finishes of brick, glass and metal siding.

Sundt served as the construction manager at-risk for the project, which was commissioned by the Administrative Office of the Courts. The Mammoth Lakes Courthouse is one of seven criminal justice projects in California Sundt has worked on in the past five years.

The courthouse features self-help computer stations, 3 customer service windows (where there was only one before), and a jury deliberation room. There are two light and airy courtrooms, with high-tech digital evidence presentation equipment.

There is also a hearing room for small claims, traffic, family law, and arraignments, for when the other two courtrooms are busy.

There is video equipment for remote arraignments in the jail in Bridgeport, which is an hour away.

The video equipment is important, particularly in the winter, when driving conditions in this remote area can be very dangerous. “[The remote arraignment] is a very efficient way for us to meet the requirements for someone to be arraigned,” said Hector Gonzalez, CEO, Mono Superior Court

Security is much improved over the former courthouse. The new facility includes modern perimeter screening; video monitors; five holding cells including one for juveniles; and a secure attorney-client interview room, whereby the attorney does not have to enter the detention holding area to meet with his or her client.

A secure elevator locks out staff when inmates are being moved and secure pathways eliminate chain-gang parades through the public hallways, according to California Courts News.

The project was funded from a special construction fund. “Because of prudence and foresight, the courthouse construction fund that paid for our courthouse was established years ago,” said Hon. Stan Eller, presiding judge, Mono Superior Court. “Money was set aside exactly for this purpose. Money did not come from the general fund.”