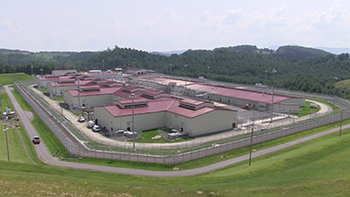 INDEPENDENCE, Va. — Inmates started moving into River North Correctional Center in early October in Independence after the facility opened as the state’s first new prison since 2007. The Security Level IV facility will house around 1,000 offenders.
The Virginia Department of Corrections (VADOC) closed several correctional facilities in recent years due to budget constraints, so the new prison adds much needed bed space to the Virginia Department of Corrections’ prison system.
“A major goal was to utilize a state-of-the-art facility to house higher security level offenders as opposed to aging facilities which make it difficult to manage these populations,” said River North Warden Ben Wright.
The new correctional facility was designed to improve security, as well as create energy efficiencies. The VADOC decided to move from the traditional precast structures to pre-engineered metal building system. The design eliminated the cell windows in lieu of a clear-story window system in the ceiling of the dayrooms that allows a tremendous amount of light that all but eliminates the need of lights during the daytime hours. The use of rear chase cells that are insulated along with the insulated pre-engineered building creates an energy-efficient building.
The facility also features some of the most current technology such as an advancement in coatings for metal cells. This allowed the use of prefabricated metal cells and panel systems, which facilitated a rear chase design, expedited construction and substantially reduced the prototype square footage. Even a few cells were added in each pod due to the thinner walls used. This design saved costs resulting from the reduced footprint and foundations. This design also created a much safer environment for staff and inmates by allowing maintenance of the plumbing or HVAC and electrical from rear chases which significantly minimizes the need to ever have "class a" tools in an inmate occupied area.
River North was constructed on the smallest footprint of any of the 1,000-bed facilities, according to Kimberley Lipp, chief of A&E Services for VADOC. The small footprint became a challenge for the project team because it required a great deal of coordination of the various utility systems. The project team spent much time in developing the design to deal with these potential conflicts before the construction began. The project also encountered unforeseen site conditions that created a potential for an extended delay in construction, however, the construction team worked collaboratively through a mitigation plan that eliminated the delay and resulted in on-time project completion.
River North Correctional Center is the fourth prison to be delivered under a public-private partnership, and the VADOC is proud of that.
“We worked collaboratively with the community and our private sector partner during the prison siting phase to find a site that was supported by all,” Lipp said.
Another major success of working closely with the local community was that it lead the project team to use perimeter or exterior lighting considered “dark sky friendly.” This was the first time VADOC had used this type of lighting in Virginia corrections, and it was a first for corrections nationally according to the International Dark-Sky Association.
Warden Ben Wright reports he is most proud of the number of security enhancements made in such a short period of time once it was determined the facility was funded to open, and would open as a Security Level IV rather than a Level III as it was initially designed and constructed. Collaboration and cooperation between prison operations staff at all levels, VADOC design and construction staff, multiple contractors, private sector A/E, inmate work crews and the State Building Official allowed significant security enhancements to be constructed in a very short time.