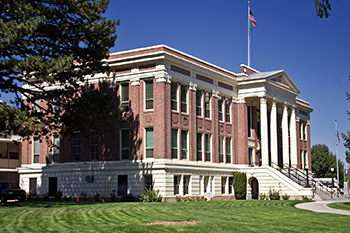 EPHRATA, Wash. — The Grant County Courthouse in Ephrata is in need of an upgrade. It is currently operating with cracks in the building and an inefficient heating and cooling system. In early June, Grant County Commissioners agreed to pay Seattle-headquartered McKinstry a full service design, build, operate and maintain (DBOM) firm, $61,000 to identify the building’s problems and apply for state grants to fix them.

Jayson Schmidt, account executive for McKinstry, said that the key upgrade that needs to be made is to replace the two-pipe system that either heats or cools the building but cannot do both simultaneously. The current system is a major energy waste, according to Schmidt, so the project team is looking to install a heat pump system that would allow the county to heat and cool the entire facility. This would also include a control system that allows the operations staff to have control over functions other than just on or off, which is all the current system allows.

If McKinstry is awarded the DAHP’s courthouse preservation grant, they would use the money to focus on the aesthetic characteristics involved in the upgrade, Schmidt said. This would involve regrouting all the joints on the building’s terra cotta bricks, fixing cracks in the bricks and bringing the front staircase back to the historic look and feel of the original courthouse built in 1917. The interior would also be upgraded to look like the 1917 version. For instance, the courthouse currently has vinyl windows that are not the historic style, Schmidt said. As such, McKinstry will look at energy-efficient windows that maintain that historic appeal.

Construction will likely begin in 2015 if everything goes as planned, and the project receives funding from at least the department of commerce grant, Schmidt said.

“We are currently in the middle of putting together an investment grade on the project,” Schmidt said. “We are working to identify the best total solution for the project, including operational costs and the life expectancy of equipment. We won’t know project scope until mid-September, and then we will be waiting on the grants.”

One of the ways McKinstry considers a project’s needs is through total cost of ownership analysis, which looks at the lifecycle of the systems taking human, environmental and cost factors into consideration. “The idea is that all of these factors come together in one comprehensive approach,” Schmidt added.

“Energy savings is always important, but it’s challenging in a place like Grant County because the cost of power is so cheap,” Schmidt said. “What’s also extremely important is upgrading the mechanical systems to save operationally. The county is looking to be proactive to save energy and operational costs while also improving comfort for occupants.”