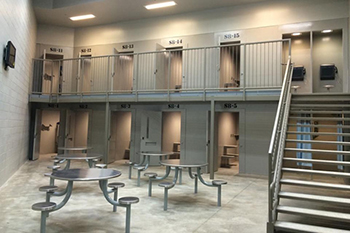 PARAGOULD, Ark. — The first phase of the $16.5 expansion project at the Greene County Detention Center was officially completed and began accepting inmates last month, about five months after the jail held its official ribbon-cutting ceremony. Although the construction has been behind schedule, the facility was built under budget, according to project manager Dave Tierney.

The general contractor on the project was Olympus Construction Inc. of Jonesboro, Ark., while the architect was HMN Architects Inc. of Overland Park, Kan.

The 75,000-square-foot expansion added 432 beds to the facility, bringing the total number of beds to 488 when the entire project is completed. Tierney says each inmate cell in the facility is constructed with thick steel and 500-pound doors. A major highlight of the new facility is the video visitation services, which allows inmates to speak with their visitors through video calls. It helps streamline the visitation process into remote video conferencing made by appointments only. All visits are also recorded.

The expansion is located behind the existing jail, which will be renovated as part of the second phase of the project. The renovation will include office space and an area for a work release program available to nonviolent offenders. The work release program allows inmates to work and then immediately report back to the jail after their shift is done to spend the night in jail. Construction on the second phase is scheduled to be finished by the end of the year and will give the jail 100,000 square feet of space, according to Arkansas Business.

The project was completed to address overcrowding issues. In fact, Greene County voters passed a 0.75 sales tax increase in November 2012 to help pay for its construction as well as operating the facility.

The Greene County facility is not the only one in the state with overcrowding issues. Another project in Jackson County is currently underway, while voters in Garland, Nevada, Prairie, Crawford and Yell counties also passed tax increases in recent years to pay for new jails.

The Arkansas Sheriffs’ Association, which is pushing for a special legislative session to address jail overcrowding issues, said county jails are holding 2,650 state prisoners awaiting prison beds, costing counties $18 million a year to house the state prisoners. It’s become so bad that counties have had to let prisoners go because they can’t afford them.

Earlier this year, the Arkansas Board of Corrections announced that it would like the state to invest in a new 1,000-bed prison, which could cost up to $85 million to build. The state currently has 19 state prisons, which house more than 17,500 inmates. There have been oppositions to the prison plan. In fact, Pulaski County Circuit Judge Wendell Griffen wrote a letter to Gov. Mike Beebe asking him to oppose it. A study is currently being conducted to see if the prison will be necessary.