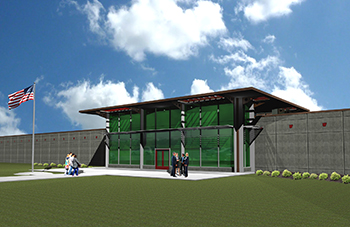 VAN BUREN, Ark. — Construction broke ground earlier this month on the new Crawford County jail in Van Buren. The nearly $20 million facility will be approximately 64,000 square feet and will include a 307-bed jail, the sheriff’s office, 911 dispatching center and arraignment court with the ability to add a full justice center in the future. The new jail will be built on a site at the edge of Van Buren off of U.S. Route 64.

The current jail, located in downtown Van Buren, opened in 1989 and was initially built to hold 64 inmates. The county expanded the jail to hold 88 inmates, but inmate populations often exceeded 100 inmates, reported ArkansasOnline. This history of overcrowding led the jail to be put on probation several times after failing state inspections. Thus, the county needed a new facility.

Collierville, Tenn.-based South Built TEAM is serving as the architect on the new jail project. The octagon-shaped facility features key design elements including the use of modular precast due to the size of the project, says Jim Langford, architect with South Built TEAM. “The economy of scale allows competitive bids compared to reinforced block,” he added.

The project budget target was $20 million, Langford said. The project bid several-million dollars below budget, allowing for all alternates to be built. He added that South Built has never exceeded budget, and all savings are staying with the owner. “In our process, 20 to 30 bid packages are normally bid publicly,” he said. “There were approximately 100 bidders on the Crawford County project.”

The design team received feedback for the project during a week-long work session developed at the client’s location with the sheriff, his staff and the funding governmental body participating, according to Langford. The work session was also open to the public.

Like many county jail facilities being constructed across the country, the project’s biggest challenge has been the budget, Langford said. He also said that the design team had difficulty designing within the constraints of the “odd-shaped” site. The project also required flexibility for future expansion, which focuses on minimizing the need for additional staff stations or posts.

The funding for the project comes from two sales taxes that voters narrowly passed in May 2014. One ballot question for a 0.5 percent sales tax passed by a margin of 4,199 to 3,974, according to election records. That tax will end when it pays off bonds that were sold to raise the construction money. The second ballot question, for a permanent 0.25 percent sales tax to provide operating funds for the new jail, passed 4,279 to 3,981, according to ArkansasOnline.

The jail is scheduled to be ready for occupancy in the spring or summer of 2017. It is one of the larger projects in Arkansas, with most county facilities falling in the 50- to 200-bed range, according to Langford.