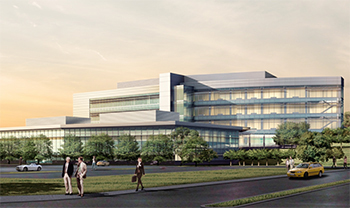 DUBLIN, Calif. — A topping out ceremony was held on Sept. 18 for the East County Hall of Justice in Dublin. The ceremony marked 40 percent completion for the building, which broke ground in September 2014 and is on pace to open in early 2017.

The $111 million courthouse comprises two buildings that make up a total of 199,000 square feet. The first is a five-story, 156,000-square-foot courthouse for the Alameda County Superior Court of California, which features 13 courtrooms and associated support spaces as well as facilities for clerks, jury assembly and in-custody holding cells. The second structure is the soon-to-be the Alameda County Judicial Office Building, which spans 43,000 square feet and two stories. It provides space for the Public Defender, District Attorney and Probation Department. The two buildings are situated on 20 acres of landscaping and include parking for 784 cars.

“One of the things unique to this project is that it has fantastic views in all directions,” said Bob Louden, principal and project manager for Fentress Architects. “Having such a significant location, it was important to create a strong civic image that reflected Alameda County.”

Not only was it important for the courthouse project to provide a strong civic image, but the project’s main goal was also to co-locate all the judicial groups — the Public Defender, District Attorney, Probation Department and courts facilities — into one space in order to improve safety and efficiency, according to Louden. As such, the design team integrated three designated circulation paths: one for the public, one for court staff and one for in-custody defendants. The courtrooms were also designed to accommodate both civil and criminal trials.

“The East County Hall of Justice is a modern, innovative and user-friendly design that evokes the process of open, accessible government,” said Curtis Fentress, FAIA and principal in charge of design at Fentress Architects. “Its use of separated circulation for the court staff, public and defendants will greatly improve the safety of all the participants.”

Green building was also a key aspect of the design, Louden said, as the design team incorporated several energy- and water-saving devices. The LEED Silver design includes features such as recycled water for irrigation, native drought-tolerant landscaping, low-flow plumbing fixtures, LED lighting and natural light in every courtroom. During construction, at least 75 percent of construction waste was diverted from landfills, and the use of low-emitting materials enhanced indoor air quality. It was also designed to comply with both seismic and Americans with Disabilities Act (ADA) standards.