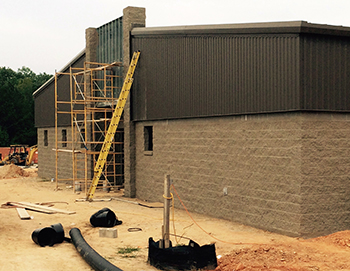 GAINSVILLE, Ga. — Hall County Correctional Institute is scheduled to debut later this year, about 1.5 years after construction began. The new facility will replace the about 60-year-old outdated correctional institute, which was originally built in 1963.

The new facility was designed by Valdosta, Ga.-based Studio 8 Design LLC. Correctional News spoke with Jim Ingram, AIA, NCARB, principal/architect, as the finalizations on the project are being completed.

Q: What was the main goal of the project?

Ingram: The main goal of the Hall County Correctional Institute is to provide living accommodations for 200 sentenced, state inmates contracted out to counties for a work-release program. The inmates are considered minimum security. The facility in Hall County was designed and constructed to replace an existing, outdated, substandard facility.

Q: What were some of the key design elements involved?

Ingram: Based on a concept that I originally designed for the State of Georgia many years ago, the design has evolved throughout the construction of 20 previously built similar facilities to the plan adapted for Hall County. The Hall County plan is a cruciform shape with the front containing administration, visitation, counseling and other inmate services. The rear contains food service, laundry and support areas.

Inmate housing is configured into four dormitories of about 50 beds each. Dormitories are placed on the sides with the control room being central to all. Construction materials are concrete masonry and steel framing with a metal roof, and interior walls are primarily painted masonry with some steel studs and drywall in the office areas. Floors in the inmate areas are waxed concrete, VCT and carpet are in the front areas, and ceilings are acoustic tile in most front spaces. Ceilings in inmate areas are gypsum wallboard and exposed structure in dorms and day rooms.

Q: What were some of the new technologies and security measures included in the new facility?

Ingram: Electronics are computer based with touch-screen controls for integrated operation of all security, communication and alarm systems. The system is non-proprietary. Camera coverage of CCTV is extensive with 47 digital cameras, some of which are pan-tilt-zoom. A video recording system records and maintains 15 days of video. All security doors have prison-grade hardware, with 8-inch jamb locks, and are motor operated.

Ingram: This project was unique in construction methodology, as the county wanted to use inmate labor furnished by the Georgia Department of Corrections. The County Purchasing Department handled the procurement of all materials. Construction management was handled by county personnel with heavy involvement and oversight by the warden of the correctional institute. Limited time allowed for inmate labor made coordination of construction activities challenging at times. It also extended construction time to approximately 18 months, with the project currently nearing completion. The overall quality of construction has been good and on par with commercial construction in the private sector.

Q: What new trends in the corrections industry are included in this project?

Ingram: The project used an alternative construction delivery method that allowed more control by the owner without premium costs.