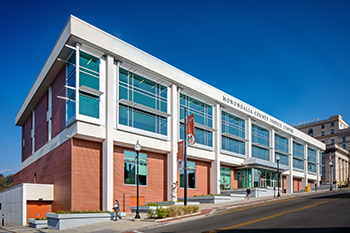 MORGANTOWN, W.Va. — The new Monongalia County Justice Center in Morgantown opened in August 2015 in the former Harley O. Staggers Federal Building and regional post office. The $18 million adaptive-reuse project not only brings life to a building that was vacant for more than eight years, but also provides a more ordered, functional and secure facility for the county’s court operations.

The previous county court operations were located in the original 1891 courthouse, and support administrative functions spread to nearby office buildings as the county outgrew the space, according to Jeremy Jones, AIA, NCARB, project architect for Charleston, W.Va.-based Silling Architects, the architect on the project. County leaders purchased the 80,000-square-foot, four-level Harley O. Staggers Federal Building to bring all the departments under one roof, but it needed a lot of work.

“The structure had fallen to a state of disrepair and desperately needed a strategic modernization to serve the evolving needs of the court system and meet more stringent code and security standards,” Jones said. “The project made responsible use of the public investment while also contributing to the overall reduction of environmental impact in reuse of the existing building stock.”

The design of the new facility incorporated three basic concepts that included clear and well-defined public spaces, the introduction of natural daylighting and the use of high-contrast interior finishes to create distinguished spaces. The circulation is simple, with distinct public, private and secure paths of movement. Security staff also has complete control of passage between these circulation networks thanks to an advanced access control system integrated with building surveillance cameras, according to documents from Silling Architects.

An expansive public lobby with security screening is located on the first floor in addition to supporting judicial services and offices for the Circuit Clerk, Prosecuting Attorney, Probation and Day Report. Courtrooms are located on the upper floors, and they are equipped with zoned lighting as well as audiovisual features such as interactive monitors, an evidence presentation cart, sound system with assisted listening and large-format screens with video-conferencing capabilities. 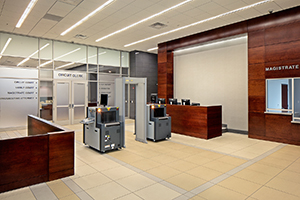 The site included an enclosed parking garage located on the rear of the building and an exposed rooftop parking deck, which is now used for secure judges and staff parking. Detainee transport vehicles also have access to a secure sallyport drop-off zone, located adjacent to the central holding in the basement, which includes eight holding cells.

“The existing parking garage below grade offered a great opportunity to place secure staff parking as well as central holding served by an enclosed vehicle sallyport,” Jones said. “This allowed the balanced placement of two detainee elevators to serve court sets on the upper floors. These transport elevators open to sound sensitive anterooms with immediate access to intermediate holding cells between courtrooms on the third floor.”

Because this was an adaptive-reuse project, there were some challenges for the design team. “The existing column grid and infrastructure created several obstacles and shaped some limitations to the widths of the court sets,” Jones said. “Jury box projections beyond the column grid helped remedy the restrictive container while expanding the litigation well and reinforcing necessary sight lines.”

He added that the existing envelope lacked the ability to meet present-day energy standards and overall efficiencies for occupant comfort. As a result, the renovation included a complete restoration of the exterior, including new glazing with supporting sun control and shading devices. New mechanical, plumbing and electrical systems with lighting upgrades also contributed to the project achieving sustainability goals.