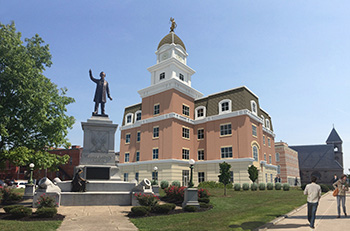 TIFFIN, Ohio — This fall, construction will begin on the new Seneca County Joint Justice Center in Tiffin. A first of its kind in Ohio, the approximately $14.4 million courts facility will serve both the city and county, housing the city of Tiffin’s Municipal Court and Clerk of the Courts as well as the county’s Common Pleas Court, Clerk of the Courts and Probation Department.

The project’s main goal was to resolve the operational and space-planning needs for both the city and county’s court systems by combining the two into a single facility within the project’s financial constraints. The building also needed to provide clearly identifiable space for the separate courts, according to Tom Potts, president of Silling Associates and principal-in-charge for the project.

“The decision [to combine the two] had a positive impact on project financing and will make way for future, downstream government facility plans for both the city and the county,” Potts said.

Programmatically, the 36,000-square-foot building is four stories. The first floor includes public entry and screening, central holding and office space for the Clerk of Courts, while the second floor is dedicated to the Municipal Court. Both of the identical, top-two floors are dedicated to the two Common Pleas Court Judges.

The facility is being built on the same site as the former historic Seneca County Courthouse, constructed in 1884 in the Beaux Arts style of architecture and listed on the National Register of Historic Places. The former courthouse was demolished in 2012 — a very unpopular decision made by the previous county commission, despite a significant effort by the citizens to preserve and restore it. The new commission’s leadership was then tasked with “re-building” a new courthouse, which has presented a number of unique challenges in terms of design.

“Because the community was so passionate about the historic character of their building stock and fearful that a modern design might emerge at the hands of one neither familiar nor sensitive to their community, the owner assembled a design committee with the sole purpose of guiding the exterior development,” Potts added.

The committee, prior to the selection of the architect and at the hands of a local historian and architectural designer, created a rendering of a four-story Second Empire Style building that was to be representative of the character of the new Joint Justice Facility, according to Potts. The rendering featured a mansard roof pierced by dormers at the fourth floor and a well-ordered rhythm of brick pilasters and window bays at the lower three stories. The concept also included a clock tower that was capped with a mansard roof and oriented to the west toward the public green space.

“The design team was challenged to incorporate the stylistic features of the period rendering into a design that is more appropriate to the image and presence of an iconic rural county courthouse, while also making programmatic sense of the clock tower,” Potts said.

A key decision for the architecture firm was to logically order the clock tower as a vertical circulation element that is placed on a meaningful east-to-west axis that addresses the public green space and recalls the location of the main entry of the historic courthouse. In the final design, the clock tower includes a cupola that is capped with a statue of Lady Justice at 135 feet above the ground.

“The new cupola is intended to recall the original cupola of the historic courthouse and will tower above the square and the city skyline like its predecessor,” Potts said.