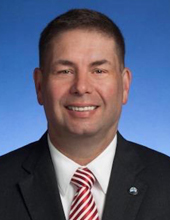 Tony Parker was recently named commissioner of the Tennessee Department of Corrections (TDOC). He now leads the team of more than 6,000 correctional professionals responsible for overseeing 110,000 offenders in prisons and on community supervision statewide. Parker began his career with TDOC as a correctional officer at the Lake County Regional Correctional Facility, rising through the ranks before being named warden at Northwest Correctional Complex in 2003. Parker was appointed warden of the West Tennessee State Penitentiary in 2006 and in 2008 once again took on the role of warden at Northwest Correctional Complex. In 2011, he was promoted to correctional administrator of the West Region. In 2012, Parker was appointed assistant commissioner of prisons. Parker earned an associate’s degree in criminal justice from Dyersburg State Community College, a Bachelor of Science in criminal justice from the University of Tennessee at Martin and a Master of Arts in security studies from the Naval Postgraduate School in Monterey, Calif. He is an active member of the American Correctional Association, serving as a correctional auditor.