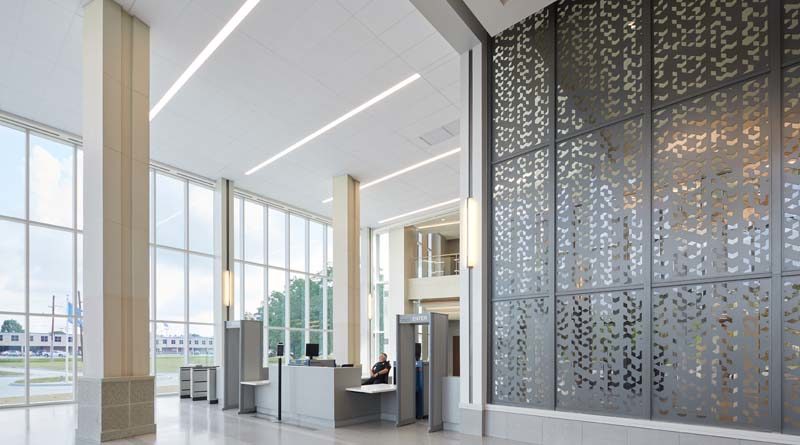 The building’s design intends to create a sense of justice while also being inviting to the community. Photo Credit: Grace Hebert Curtis Architects

What do you get when you mix two established design groups, a proven Southern construction firm, and the mutual goal of creating an ultra-secure, welcoming bastion of community justice?

The new Ascension Parish Courthouse, a vital 103,000-square-foot, eight-courtroom facility that made its official debut this spring in Gonzales, La.

Via multiple meetings with project stakeholders, security was a major driver behind the courthouse design—a goal achieved through numerous approaches, including clear separations of public, secure and inmate travel within the building. The layout is transparent and well defined with no cross-over of inmate, judges and public traffic. The design improves greatly on its predecessor in part by emphasizing these subtle, yet effective, separations between the public, detained individuals, and judicial and law enforcement staff.

The impressive, large-glassed lobby of the Courthouse offers ample space for visitors queuing through the security scanners. From the lobby, visitors will then be able to access the Clerk of Court, the Parish Courtroom, and the 23rd JDC Courtrooms. The Sheriff and the Gonzales Police Department will also have a Fines Collection station near the Parish Courtroom.

The three-story building also has a total of eight courtrooms, with CGL taking the lead on the courtroom design and Grace Hebert Curtis heading the overall project architecture. The Lemoine Company was the builder for the undertaking.

“CGL Companies provided program verification and courts design support for the project,” CGL Senior Vice President Enrique Maciá remarked to CN. “We worked closely with the users, the Parish and Grace Hebert Curtis to develop the overall building organization as well as the final courtroom interiors. Our focus was on creating schematic layouts for the courthouse that emphasized wayfinding and an easy intuitive user experience. High volume spaces such as the Clerk’s office and the large Parish Courtroom were located on the ground floor, judges chambers were located together on the third floor in a collegial arrangement to take advantage of the shared resources and security available with collegial chamber layouts.

Glass is used prominently in the new venue’s design, in ways that enhance both safety/security and the facility’s vibrant aesthetic. Vast expanses of glass are integrated along the exterior to bring natural light into the building, and glass is also strategically located throughout the interior to provide staff added security and prevent the passage of contraband to those in custody. Exemplifying this is a patterned glass screen wall along inmate movement routes that offers texture and visual interest to the space.

Wide steps and a small plaza flank the facility’s exterior, with soaring columns supporting a dramatic overhanging roof that results in a majestic and eye-catching entrance. The outside colors and materials palette—as well as the use of columns—extends into the lobby, embracing consistency between indoor and outdoor design.

Editor’s note: This is an abbreviated version of the Facility of the Month feature from the CN July/August issue.