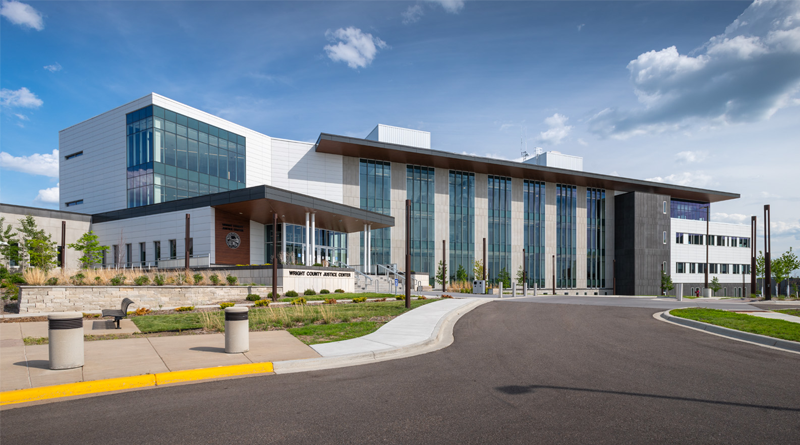 BUFFALO, Minn.—BKV Group has announced the completion of the $48 million Wright County Government Center in Buffalo. The four-story, 222,538-square-foot facility at 3650 Braddock Ave. NE is co-located on the same campus with the county’s Law Enforcement and Justice centers and houses 10 county departments, the County Board Room and Department of Motor Vehicles’ License Center.

“With the Government Center located jointly with the two other facilities, the resulting overall site now provides a cohesive and convenient government service campus for this growing and forward-thinking county,” said Bruce Schwartzman, government practice leader and partner with BKV Group. “The new building provides a single point of service for citizens and improves the overall efficiency of space use including enhanced wayfinding and security.”

BKV Group designed the Government Center’s interior with an intuitive layout based on foot traffic of the citizens, noted Schwartzman, with the highest-volume departments located on the main level, including the Assessor, Taxpayer Services, Planning and Zoning, Veterans Services and License Center. In addition, the open-concept lobby allows for visibility to the second-level Human Services Department, which fills the entire floor. The building’s large front windows provide ample flow of natural light throughout the lobby area, which also includes an information desk, grand staircase and elevator banks. The third floor houses the IT Department and other administrative offices, internal staff meeting rooms and break room.

Citizens can also access the 2,200-square-foot County Board Room, where community meetings take place, from the main level. A focal point on the building’s eastern end, the board room is glass-enclosed, with 16-foot ceilings and three adjoining public conference rooms to increase capacity as needed.

“The idea was to create an integrated campus design that not only satisfies the county’s functional requirements for years to come, but also instills a sense of civic pride among the residents of Buffalo and Wright County,” said Schwartzman. “In planning this state-of-the-art facility, we also sought to establish visual continuity with the adjacent properties and incorporate durable materials – such as locally sourced natural limestone, brick and glass – that will stand the test of time, all while being mindful of budget.”

To acclimate increased traffic volume coming in and out of the three-building campus, BKV Group reconfigured parking to be closer to each property and expanded the total number of spaces from 275 to 1,600. The Government Center also features a drive-through window connected to the License Center for residents to conveniently pick up renewal stickers and other documents.

In designing the Government Center, BKV Group leveraged its full-service model by providing planning and pre-development services and leading all architecture; structural, mechanical and electrical engineering; interior design; and landscape architecture. Working with county officials, BKV conducted an extensive study on a potential redevelopment of the existing Government Center, located approximately 2 miles south of the current campus, before ultimately deciding to move ahead with a new ground-up facility that consolidated county departments to one location.

BKV Group previously designed the adjacent four-story, 155,000-square-foot Wright County Justice Center, home to nine technologically advanced courtrooms with a mass calendar court, a multi-party/family court, an in-custody courtroom, grand jury court and law library, that opened to the public in May 2020. It was built alongside an existing Law Enforcement Center, which houses the Wright County Sheriff’s Office and a minimum-security jail.

Construction management for the Government Center was led by Contegrity Group of Little Falls, Minn.

BKV Group is currently working on similar government projects in Ingham County, Mich., and Pennington and Stearns counties, both in Minnesota.