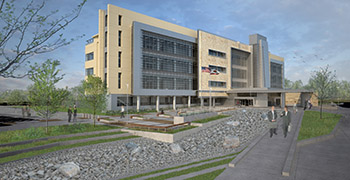 HANFORD, Calif. — Construction on the new 144,000-square-foot Kings County Courthouse in Hanford is well underway, with a current expected completion date of late 2015.

HANFORD, Calif. — Construction on the Kings County jail addition in Hanford began on July 28. The 252-bed project is yet another California project being constructed to help relieve overcrowding as a result of prison realignment.

It is the first jail to break ground under Phase II of AB 900 in which lower-level felons have begun serving time in jails as opposed to California prisons. The Kings County jail population has more than doubled since realignment. It now has about 600 inmates, compared to the 280 inmates it housed on average just three years ago.

END_OF_DOCUMENT_TOKEN_TO_BE_REPLACED