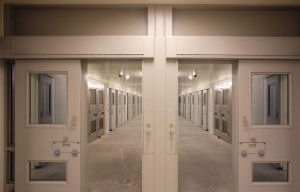 The state’s total incarcerated population is more than 18,000 inmates, but the department pays local jails to house about 800 inmates and houses another 1,200 inmates in other states, according to official figures.

In addition, 2005 state regulations mandate all large public-sector projects in Washington, including correctional facilities, attain LEED Silver certification — a green building requirement that came to define the mindset of the project team throughout the entire design-build process.

“Coyote Ridge Corrections Center is designed to protect both the public and our environment,” says David Jansen, WDOC director of capital programs. “In the context of state corrections, we believe this campus is one of the most humane and environmentally friendly secure facilities in the country.

“If successful, Coyote Ridge would be the first prison campus in the United States to achieve LEED Silver,” Jansen says.

“This was a model project where teamwork, cooperation, communication and problem solving were the defining characteristics,” says Jack Olson, DOC project irector. “This team didn’t think only in terms of legal obligations and LEED requirements, they saw the challenges as an opportunity to develop innovative strategies and solutions.”

“Over the lifecycle of the facility, the cost of operations truly dwarfs the initial construction cost,” Olson says.

Phoenix-based Hunt Construction and Lydig Construction, of Spokane, Wash., formed Hunt Lydig Joint Venture to head up the Coyote Ridge design-build team, which included Integrus Architecture, of Spokane, as the prime architect. Integrus also assumed responsibility for structural engineering and physical security on the project, while Atlanta-based architecture and engineering firm Rosser International was the architect of record for the inmate-housing component.

“We wanted to create a campus layout that would be conducive to facility management and inmate and staff movement with every aspect guided by the mandate for energy efficiency and resource conservation,” says Gerald Winkler, principal with Integrus Architecture.

A 100-bed segregation unit will house inmates with behavioral problems and new arrivals awaiting assessment and classification before assignment to permanent housing. The five-wing building incorporates prefabricated steel cell construction by Trussbilt with a precast shell and thin-wall steel panels. A medical clinic — there is no infirmary — features mental health and dental facilities and two isolation/observation cells. Inmates requiring hospitalization are transported 45 miles to the state penitentiary in Walla Walla.

The four hybrid units are designed to accommodate inmates who fall between minimum-custody and medium-custody security classifications. The low-risk, long-term inmates in the hybrid units will carry keys to their two- and four-bed dry cells, which feature a concrete shell with steel-stud and gypsum board interiors from Georgia-Pacific.

The design team integrated the standard range of security electronics, including video surveillance and access systems with touchscreen controls, into the medium-security units. However, the innovative hybrid units feature a simplified design with minimal technology, less security electronics and reduced staffing requirements. Compared to a conventional medium-security housing, the units yield lower initial construction costs and are projected to reduce operational and maintenance costs.

The secondary interior barrier is composed of a taught-wire perimeter intrusion detection system with integrated audio alarm and video surveillance.

Although the Coyote Ridge project incorporates 21 buildings, DOC officials submitted a single LEED certification submission for the entire campus. Washington DOC has 12 LEED certified buildings (eight Silver-rated), including a medium-security and segregation units at the state penitentiary, in Walla Walla.

Confident of achieving Silver status — and still holding out hope of Gold — project principals also acknowledge the pursuit of USGBC certification presented significant difficulties and a host of obstacles that required creative thinking, innovative solutions and more than one reality check.

The project team struggled to balance imperatives of sustainability against the essential functions of safety and security at the correctional facility. Integration of stringent green building requirements is difficult to accomplish within the constraints of mission-critical risk management, high-density/low-autonomy occupancy and 24-hour operation environment.

“The way the LEED scoring system is structured, particularly in the case of correctional facilities, a lot of the points can go by the wayside,” Winkler says. “The basic functions of safety and security in correctional facilities conflict with many of the focus areas and sustainability strategies that are central to LEED certification.

“It would be great if the LEED rating structure offered a little more latitude and the certification process was a little more flexible and sensitive to the challenges and constraints of corrections,” Winkler says.

Correctional facilities chasing USGBC certification often have to abandon a number of green building focus areas and their LEED credits from the outset, concentrating instead on other more practical strategies that offer a realistic chance to score points.

Natural lighting presents one of the greatest challenges with secure environments where factors, such as lines of sight and inmate movement and management, essentially dictate the orientation of inmate housing and day space and configuration of the building envelope.

“Daylighting, which gets LEED points, is particularly difficult to integrate because of restrictions on the size, area, type or location of glazing that flow from the basic mission functions of safety and security,” Winkler says. Skylights were proposed, but ruled out due to maintenance issues.

“You have to go into certification with more points than the minimum level you’re seeking, so although we had a mandate to meet at least LEED Silver, our submittal has enough points for Gold,” Winkler says.

Department officials asked the USGBC to assign a single reviewer to Coyote Ridge submission, in part to avoid repeatedly justifying the necessity to balance security and sustainability — often, multiple individuals can become involved with a specific project during the course of the green building certification process.

“The reviewer got to know this project and understand the constraints and imperatives of correctional facilities, and I think that really helped the process and our chances of success,” Jansen says.

“The decentralized heating and cooling system is a good fit for this project. It just works well.” Olson says. “We also had the advantage of building the entire campus at once, which allowed us to design identical facilities with identical building systems and reduce construction and operations costs.”

Central Washington has an arid climate with an almost desert-like environment 8 inches to 9 inches or rain per year. With limited opportunity for water catchment and recycling, the design team tried to keep water use to an absolute minimum and also eliminated post-development stormwater run-off from site.

Landscaping is limited with little vegetation, other than native sagebrush, as designers incorporated locally sourced concrete/ash gravel as a loose surfacing material throughout the site. With the exception of the soccer and baseball fields, which feature natural grass — at the loss of one LEED point — the project team was able to limit site irrigation.

The irrigation system uses moisture sensors to control operation, reducing water usage by more than 50 percent compared to conventional systems. The automated system also incorporates dual piping loops designed to allow the use of reclaimed water should it become available in the future.

In addition, the entire campus is outfitted with low-flow plumbing fixtures, while all showers and faucets located in housing units incorporate flow restrictors and push-button controls. Kitchen and laundry operations reclaim heat and reuse water over multiple cycles and tasks.

“We keep very close track of water and energy usage,” Olson says. “A facility of this type would be expected to consume about 100 to 120 gallons of water per occupant per day and we are gunning for water and sewage reductions in the region of 20 percent,” he says.

Independent third-party commissioning, which includes design and construction reviews will ensure all mechanical, electrical, and plumbing systems perform to specification. Utility sub-meters provide supplemental post-occupancy data on energy and water use and the DOC implemented a measurement and verification plan to monitor ongoing building and systems performance and resource consumption.

In addition to integrating energy-efficiency and conservation strategies, officials also pursued grant funding for renewable-energy generation solutions and considered the installation of wind-power micro-turbines as an alternative-energy solution. However, site evaluations and wind measurements suggested wind conditions would not be of sufficient levels and speeds to generate renewable energy on a consistent basis.

Switching focus from wind to sun, officials used a state grant to launch pilot solar project that is projected to generate approximately 104 kWh per year, or more than 1 percent of total energy requirements.

“Originally, our goal was to generate about percent of our electricity needs through on-site renewable energies,” Olson says. “We see solar collectors as a great opportunity for high energy-use facilities that operate 24 hours per day to reduce the amount of energy they draw from the grid.”

The solar installation incorporates flexible, lightweight rooftop photovoltaic panels that do not require the roofing structure to be reinforced. The photovoltaic panels offer reduced installation costs and comparable levels of efficiency and life cycle to the heavier, rigid conventional crystalline solar arrays and may also extend the life of the roof itself by providing an additional sealed layer.

The Coyote Ridge project secured preliminary LEED credits with a range of other sustainability strategies. Designers provided access to public transit with a secondary bus stop, while bicycle racks, lockers and shower facilities encourage staff to use alternative transport.

“A lot of green elements can be incorporated into a project like this,” Jansen says. “In fact, much of what we call green or environmentally sustainable is just common-sense efficiency that is already being integrated into prisons and jails throughout the country.”