Articles
September 14, 2010 1810 Views Florida
DUBLIN, Ireland — The Department of Justice and Law Reform approved the issuing of tenders for the first two housing units at a planned $555 million prison complex outside Dublin as government officials abandoned public private partnership in favor of a more traditional procurement process to deliver the largest prison in the country’s history.
The proposed Thornton Hall Prison, located on a 140-acre Greenfield site in Kilsallaghan, will now be built in three phases to deliver a total of 1,400 cells in multiple housing units with an operational capacity of 2,200 beds, according to the Department of Justice.
The new approach will allow authorities to bring beds online in stages, allowing the facility to open sooner than originally planned.
Under the original PPP plan the complex was to be built in a single-phase construction program, with the Department of Justice paying for the new prison over a 25-year term of a design-build-finance deal it had with the Leargas consortium, sources say.
The government ditched the original PPP delivery of Thornton Hall following significant increases in estimated project costs, according to reports. Under the PPP agreement, the Leargas development team would have provided operational services at the facility following the projected completion of the complex in 2016. 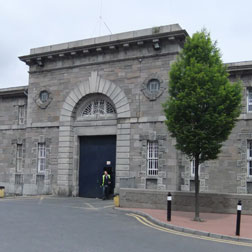 “The previous public private partnership tender competition envisaged that the entire prison campus with all 1,400 cells would have been constructed as one job and no cells would have entered into operational service until the entire campus was complete and handed over to the Irish Prison Service,” says Dermot Ahern, minister for justice, equality and law reform.
Under Phase One of the revised plans, the first 400 single- and double-occupancy cells at the Thornton complex are scheduled to come online in 2014. A Europe-wide RFP for the two of the Phase One housing units, which will house up to 700 inmates, will be issued in early 2011.
“Going to tender for the work makes sense in an environment where construction costs have fallen significantly,” Ahern says. “It also will allow us deliver on badly needed prison spaces earlier than relying on a more protracted PPP timescale.”
The first phase of the project, expected to begin in 2012 after perimeter work for the complex is complete, encompasses basic site preparation work and essential utilities infrastructure for the development, including the construction of a dedicated access route and a perimeter wall, officials say. The initial phase will also incorporate educational and vocational training space and visiting areas on site.
The contract for site preparation work, including access and circulation roads was tendered out recently and could begin in the fall. The contracts for the perimeter security component and water and wastewater treatment facilities are being tendered separately, according to reports.
“The procurement process for the buildings and facilities that will make up the new prison campus is complex,” Ahern says. “Our objective will be to complete the procurement process for the main prison complex while construction of phase one is underway.”
Completion of the Thornton project will put on hold the planned closure of the 590-bed medium-security Mountjoy Prison. The closure of Mountjoy, which opened in 1850 and has long been criticized for its unsafe, overcrowded and inhumane conditions, will be deferred to facilitate the phased development of the Thornton complex and incremental increase capacity system-wide, according to reports.
The Victorian-era Mountjoy facility is based on the design of London’s Pentonville Prison. Although Mountjoy originally featured in-cell sanitation, the system was removed in the 1930s to conserve water, forcing inmates to engage in the practice of slopping out.
Operations at Mountjoy could be phased out as replacement beds come online to ease overcrowding across the system.
“Our twin aim in these revised proposals has been to best protect the taxpayers’ interests and at the same time provide modern accommodation to replace the Mountjoy prison complex in the shortest possible time frame,” Ahern says.
A timeline for phases two and three of the Thornton project, each delivering an additional 500 cells, is yet to be established. However, construction of these subsequent phases of the project will proceed as funding becomes available, officials say. 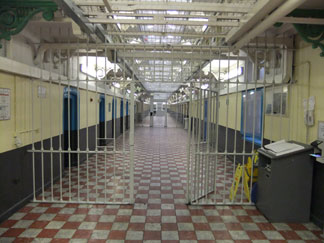 “The provision of these facilities represents just one aspect of the major prisons capital program funded by the government,” Ahern says. Since 1997, successive governments added 1,670 new beds to expand system-wide capacity at 14 facilities to approximately 4,100 beds, including new units at Castlerea and Cloverhill prisons, the Portlaoise-Midlands complex and the women’s facility on the Mountjoy prison campus.
The number of custodial sentences handed out to offenders increased approximately 20 percent in recent years, while more than 80 percent of inmates serve sentences of at least 12 months, officials say. Corrections authorities implemented early release for approximately 1,000 inmates recently amid worsening overcrowding system-wide as the total prison population exceeded 5,000 inmates for the first time.
Only four of the 15 prisons in Ireland are operating at less than design capacity with the remaining 11 housing approximately 10 percent more inmates than the stipulated design capacity, according to official figures. The 85-bed women’s facility located on the Mountjoy campus — operating approximately 60 percent above design capacity — is the most overcrowded facility.
While the main facility at Mountjoy, which regularly holds about 700 inmates, has a design capacity of 590 beds, the Inspector of Prisons recently advised corrections officials that the male prison should hold a maximum of 540 inmates in order to operate safely.
With more than $50 million already invested in the project, the Thornton Hall development remains a central plank in a major prison expansion and renovation program instituted by the government to alleviate chronic overcrowding and replace aging, outmoded and substandard facilities, according to the Irish Prison Service.
“The building of the Thornton Campus is a cornerstone of our prison policy,” Ahern says. “It will deliver lower annual operating costs and much better prisoner facilities when opened,” says Ahern, who recently unveiled the country’s newest inmate housing unit at the Victorian-era Portlaoise prison, a maximum-security facility opened in 1830.
Already in use, the new 200-bed wing at Portlaoise, located 70 miles southwest of the capital Dublin, includes 75 single-occupancy cells and 60 double-occupancy cells, increasing rated capacity to almost 399 beds.
At-risk and intensive management inmates can be housed in a segregated area incorporating three single-occupancy cells.
In addition to the new $33 million housing unit at Portlaoise, the Irish Prison Service brought a further 350 beds on-line at three separate facilities during 2009.
A refurbished segregation unit at the 590-bed Mountjoy Prison provided an additional 50 beds in the center of Dublin, while a new wing at the 430-bed Wheatfield Prison, outside Dublin, which can house approximately 200 inmates, opened in September.