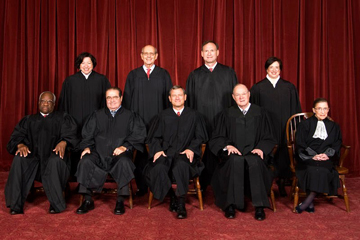 WASHINGTON — The U.S. Supreme Court had a schooling in the problems that plague California’s prison system as it heard oral arguments in Case No. 09-1233: Arnold Schwarzenegger, Governor of California, et al., versus Marciano Plata, et al. — a group of litigants that is made up of more than 70 cases and spans back twenty years.

The matter centers on unconstitutionally severe overcrowding in the state’s prison system, proper healthcare for inmates, the potentiality of releasing between 36,000 and 45,000 offenders to ease the situation, and whether or not a three-person federal court panel should have been invoked in 2005 to supersede the work of a court-appointed receiver that had been appointed months earlier.

Representing California, the plaintiff in the case, was attorney Carter G. Phillips of Washington, D.C.  Attorney Donald Specter of Berkeley, Calif., made arguments on behalf of the respondent.

In his opening statement, Phillips called the notion of inmate release “extremely premature,” and said that while a federal court order may come at some point, that it would likely be “substantially smaller in scope” than the current order. He called the release of inmates a “remedy of last resort.”

In direct questioning from Justice Samuel Alito, Specter clarified the position that inmate release did not necessarily mean allowing offenders back out on the streets.

“It’s important to understand that this is not a release order. It’s a population crowding reduction order,” Specter said.

“The Court is not ordering the State to throw open the gates of its doors and release people,” Specter said.  “They can reduce crowding through more transfers to out of state. To your construction point, if the state still chooses, it can construct new facilities to increase the capacity. And the three-judge panel [has] said if you increase the capacity, you can increase the population.”

Justice Sonya Sotamayor said that with California’s fiscal crisis and lack of appropriate funding for prison construction, that California building its way out of the overcrowding situation didn’t seem like an option.

“The court below talked about some proposals like construction and said the legislature has struck them down,” Justice Sotamayor said. “The fiscal crisis has gotten worse, so construction is really not an option.  I don’t see how you wait for an option that doesn’t exist. “

Sotamayor added that while Phillips had said that California had approved $2.35 billion in spending for prison projects (down from the $8 billion originally asked for), that the amount had not actually been approved, as there were several conditions that needed to be met.  Phillips acknowledged the Justice’s point, but stated that as a result of the $2.35 billion, that new construction of correctional facilities has already begun.

“Well, $400 million of it has already been spent,” Phillips said. “The rest of it has already been earmarked for this particular purpose, and the expectation from the State of California is that money is going forward. Construction is, as we speak, under way. And the one thing we do know is that each time the Receiver asks for a check, he gets one.”

Phillips later acknowledged that the funding was not “etched in stone.”

Phillips asked the court to consider allowing the plan established by the Receiver to continue and predicted that given time — a period for which he would not specify — that the overcrowding issues would resolve on its own.  He asked the Court to consider the true cause of the constitutional violation in the case, which he stated was not due to overcrowding — an opinion that is opposite to what state officials have already admitted to be true.

“Again, to go back to the root cause of the constitutional violation, it’s not overcrowding,” Phillips said.  “I mean, when California violated the constitutional rights of the mentally ill in the 1990s, the prisons weren’t crowded. It’s because there was a fundamental lack of attentiveness to medical care under those circumstances.”

“At some point the Court has to say: You’ve been given enough time; the constitutional violation still persists, as the State itself acknowledges,” Justice Anthony Kennedy said.

“It seems to me that, first of all, I’m not sure that is consistent with the language, the primary cause of the constitutional violation, not the primary impediment to a specific remedy,” Phillips said.  “I think that is stall a difficult and open question as to how to proceed.”

“But it still strikes me that the sequence that Congress envisions and the one that would make the most sense and ultimately the one that hopefully would accommodate the plaintiffs’ interests and the States interests, and the Depart of Corrections’ interests, to allow the receiver to stay on a course that candidly I think, in fact, will get you there.”