AUGUSTA, Maine — Lawmakers in Augusta are considering a bill to build a privately run prison in Milo, a town in Piscataquis County that harbors double-digit unemployment and a depressed business climate stemming from a 2008 fire that eviscerated a third of its downtown.
The bill, sponsored by Republican Sen. Douglas Thomas, is still in its nascent stages, but clearly aims at authorizing construction of a private prison there.
“If there’s a chance of getting 100 good-paying jobs, I’m interested,” Thomas told reporters.
Milo town officials began discussing the construction of a private prison with Corrections Corp. of America (CCA) three years ago, but CCA said it would not enter the market until lawmakers amended state law to allow Maine prisoners to be housed in private correctional facilities.
Their discussions centered around the possibility of building a $100 million to $150 million prison housing 1,800 to 2,300 inmates and employing 200 to 300 people. According to Milo Town Manager Jeff Gahagan, CCA is ready to reopen discussions now that the new administration is in place. Republican Gov. Paul LePage recently stated that he would consider privatizing the prison system in a bid to ease the state’s budget woes.
“With the new leadership in Augusta, we felt that a private prison would be looked at as an economic opportunity,” Gahagan told reporters.
Rep. Paul Davis, R-Sangerville, agreed that the change in administration has reignited interest in the project, which lost steam during the previous administration after Democratic Gov. John Baldacci proposed moving many of the state’s prisoners to privately run facilities in other states. Lawmakers quickly voted down the proposal. 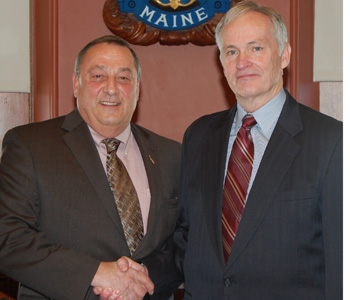 Last month, LePage nominated Joseph Ponte, who recently worked for Corrections Corp. of America as a warden in Nevada, for corrections commissioner. LePage said that Ponte’s nomination was not an indication that he would privatize Maine’s prison system, but he did say that he may allow a private prison company to build a facility in Maine to house inmates from other states.
As previously reported in Correctional News, , LePage told reporters, “My administration has absolutely no interest or intent of privatizing the current state system. The only thing that I would ever do and contemplate is if a private-sector prison company wanted to come to Maine and build a prison and pay taxes and house out-of-state prisoners. I may consider that.”
Officials in the town of Milo and CCA have been discussing the construction of a private prison there to hold out-of-state inmates for the last three years, but CCA has refused to sign on to the project unless the state amends its laws to allow inmates to serve their sentences in private facilities.
CCA donated $25,000 to the Republican Governors Association, which was ultimately spent on LePage’s gubernatorial race last year. LePage denied allegations that he nominated Ponte because of CCA’s donation or to persuade the company to build a private prison in Milo. Gahagan said a private prison would create jobs in corrections, medical care and food service, as well jobs connected to a possible biomass power plant that may be built in conjunction with the prison. He also said he does not see any other project coming to Milo that can bring jobs and living wages to its unemployed residents.
This is not the first time Northern New England has invited prisons into town to create jobs. Residents in Berlin, N.H. voted in 2002 to bring a federal prison to the city in an attempt to replace the jobs the area recently lost due to major employers moving out of the region.
The new Berlin prison is slated to open this summer and employ 330 workers, 200 of which will hail from New Hampshire. Employees form other federal prisons will fill the remaining positions.
Lawmakers will also consider several other corrections-related bills this session, including proposals to consolidate county jails and state prisons, transfers of inmates out of state, treatment of inmates in lieu of incarceration and limited parole.