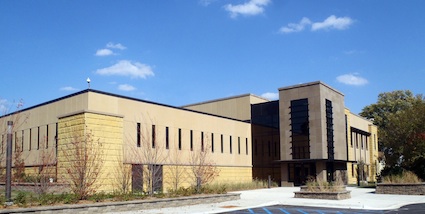 CALEDONIA, Minn. — All design projects have some challenges, and some have more than expected. Often it is those very challenges that make a project special.

The Houston County Justice Center in Caledonia, Minn., brought its fair share of challenges to Klein McCarthy Architects, but replacing the oldest operational jail in the state brought great rewards as well.

Construction on the Houston County Justice Center wrapped up in October. The new facility is located within the existing downtown courthouse square, which features a courthouse built in 1883 and a jail built in 1875. The original courthouse remains in operation for other county services, while a study is under way to decide whether the historic jail should be repurposed or documented and removed.

The old facility provided only one historic courtroom and no jury prep areas. The new facility doubles the size of usable capacity and provides a main courtroom, a hearing room, and large classroom training areas that can be used for jury deliberations. The historic courtroom is also still available, if needed.

“The fact that we were replacing the oldest operational jail in the state was pretty cool,” said Scott Fettig, Klein McCarthy’s principal in charge and project manager. “Just to go through there and see the history of that and trying to be sensitive to it.”

The project required walking a delicate line between historic and modern.

The design features a neoclassical façade with materials and proportions that complement the surrounding historic structures. Exterior detailing helps the large structure blend in with the surrounding residential neighborhood. A prominent public entry creates a strong sense of presence for the building, and the entry features subtle modernist lines to provide a refrain from the prevailing classical rhythms.

“The jail was built in the late 1800s, and to replace that with something modern is a huge leap for them,” said Fettig. “We tried not to copy it directly but tried to get some of that feel and also give a modern feel to the justice atmosphere.”

“The new building was within 15 feet of the old historic jail, so we utilized architectural precast concrete panels, and we incorporated some of the old stone look of the original jail into the new precast panels,” said Klein McCarthy Designer Danielle Leger.

Limited site space and city requirements further challenged the design team, restricting the new building to not more that 35 feet in height or 65,000 square feet of area. Additionally, the building’s footprint had to respect the adjacent courthouse, jail, and neighboring residential property, as well as an existing Veterans Memorial on the property. The justice center created a backdrop so as not to detract from the memorial, and the design team met with numerous user groups to ensure agreement with each step of the design process.

“The site was a difficult one,” said Fettig. “The Veterans Memorial is right in the middle of the campus, and we worked very closely with that group to possibly relocate that. It was determined to leave it, and then we had to work around it and protect that — not lose that courtyard feel.”

While the construction time frame took 14 months, the project itself took years to come to fruition.

“I’ve been working with the county and city, off and on, for at least six years,” says Fettig.

There was an extended approval process for this project in relation to city planning and zoning. The city originally did not want the jail downtown and “really fought it pretty hard,” says Fettig. The county looked at options outside of downtown, but development costs were prohibitive.

Litigation was filed, but eventually the city council and the mayor changed over during an election, and the new representatives reached an agreement through mediation. The design phase really began about two to three years ago, says Fettig, and then the process moved forward. 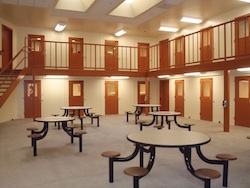 The precast concrete wall panel design utilizes cast stone bands and custom form liners to achieve its neoclassical appearance. The custom wall panels reduced time during construction to enclose the building envelope. Once the exterior walls were set in place, the roof was constructed, and the interior work could continue throughout the winter.

In an effort to replicate the deep reveals and extensive relief of natural stone construction, the design team pushed the boundaries of what is possible for precast wall panels. The panels themselves vary in thickness, depending on the location within the building, their banding, and reveals vary in depth, profile, and finish, and the colors and textures are designed to create a clear connection to the adjacent historical structures. Despite the variations, all panels provide integral insulation that exceeds the code requirements.

The premanufactured steel cells were built at the factory and shipped fully completed, with the exception of putting on the doors, said Leger. “It was very efficient in laying out the jail because of the thickness of the wall,” she said. “They stack on top of each other, so laying those out was very efficient.”

“The modular part of it ended up saving us in the square footage by being able to reduce the footprint,” said Fettig. “The cell size — rather than using an eight-inch masonry wall or concrete, we were able to use a two-inch wall. Those things save probably somewhere around 2,500 square feet of wasted space, so we were able to save in that regard. And then just the speed of being able to take them off a truck and stack them up on top of each other and roll them in a building, that saved somewhere between two and three months on the construction schedule.”

Although the building is not LEED certified, Fettig maintains it is designed with sustainability in mind. For instance, the premanufactured steel cells are made of 90 percent recycled content, and the off-site manufacturing process reduces material waste and enables mass production and quality control.

“What we are finding in Minnesota is we design to where green makes sense and is economical,” he says.

“Most of the stuff we’re doing, several would qualify for silver, and most would get bronze if they actually went for it. They still want those features, but they just don’t spend the money for certification.”

Storm water is fully treated on-site via an on-site filtration underneath the parking area, which helps with irrigation and storm water runoff and also eliminates the need for water retention ponds.

“Part of that is not only did they not want those above ground, but the site is very, very small, and getting parking there was a premium,” said Fettig. “So they really tried to do what they could to maximize the surface area.”

Interior finishes feature “green” attributes. All adhesives are low VOC, the carpet is 100 percent recyclable, and all products generated during manufacturing were recycled so that no waste entered the landfill. Additionally, the landscape plan called for plant materials that require no irrigation and native species that will withstand the harsh climate.