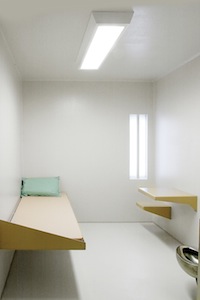 Jim Haerle is vice president of engineering at Gurnee, Ill.-based Kenall. He can be reached at jhaerle@kenall.com.

Our nation’s nearly 4,000 jails, prisons and holding facilities, which house more than 2 million inmates, face tremendous operating and maintenance costs. The enormous size and complexity of correctional facilities provide an excellent opportunity, however, to find common solutions to complex problems such as maintaining security while reducing operating expenses.

Safety, security and operational efficiency are the top priorities at correctional institutions, many of which face significant overcrowding and budgetary constraints that make meeting these mandates even more difficult. One way to handle these challenges and make day-to-day operations more secure is to install LED luminaires in inmates’ cells. Some of the largest correctional facilities are aggressively implementing LED technology to reduce maintenance costs and improve security. Let’s compare the benefits of the incumbent fluorescent lighting fixtures versus LED luminaires in correctional facilities’ cells.

The Department of Energy recommends that end users compare the performance of a LED luminaire as a replacement for linear fluorescent lamps on the basis of light output, distribution, color quality, energy efficiency and cost effectiveness. In particular regard to correctional facilities, we should also examine the frequency with which they need to be replaced and the implicit security challenges.

Fluorescent tubes have been lighting most of America ever since they were brought to market in 1938. They are four to six times more energy-efficient than incandescent bulbs and last on average 10 to 20 times longer, with an average life rating of up to 30,000 hours. Linear fluorescent lamps are widely used in commercial and institutional spaces, such as correctional facilities. The fixture is a low-pressure, mercury vapor discharge source consisting of a tubular glass bulb with a sealed base and electrode at each end. The electrodes are coated with a material that, when heated upon lamp starting, emits electrons that establish a current across the lamp.

There are disadvantages, too. Fluorescent tubes contain mercury and phosphor, which present health and environmental risks. By operating on alternating current, fluorescent lamps emit a stroboscopic, or fluctuating, delivery of light. This stroboscopic effect can harm people in the illuminated space, possibly causing increased nervousness or irritation — both highly undesirable effects in a correctional setting. And while fluorescent lighting accounts for a high percentage of existing lighting worldwide, switching from fluorescent lighting to LED lighting can significantly reduce global lighting power consumption and greenhouse gas emissions.

The main roadblock when it comes to retrofitting high abuse applications with fluorescent luminaires, such as in the cells of correctional facilities, is the relatively short lifetime of fluorescents, which calls for frequent re-lamping. Fluorescent lamps typically should be replaced every three to four years, as part of a routine maintenance schedule to maintain lumen levels and preserve ballast life. However, in a high-abuse setting, cell fixtures may be re-lamped as frequently as semiannually.

This recurrent lighting replacement and maintenance requires inmates be locked up for extensive periods during re-lamping. In a maximum-security environment, this extended lock-up often creates logistical concerns and increased security challenges for prison personnel dealing with some of the most difficult inmates. Hence it is critical that lighting require maintenance as infrequently as possible so as not to disrupt prison routines.

LEDs have been around for over 40 years. The small solid-state devices can be used to produce millions of different colors and brightness levels of light with significantly less energy than traditional lighting methods. In recent years, LED technology has advanced to the level where it can match or outperform traditional light sources.

Due to their long life, LEDs are virtually maintenance-free and often have dramatic energy savings. LEDs also re-strike instantly after a power interruption and can be controlled with occupancy sensors to save even more energy.

Additionally, an LED does not burn out like a standard lamp, so individual diodes do not need to be replaced. Instead, they gradually produce lower output levels over time. In fact, well-designed LED luminaires may operate for 50,000 to 100,000 hours, and still deliver at least 70 percent of their initial performance at the end of their lives. In a well-designed LED luminaire, if one diode fails it does not result in a complete fixture outage.

Durability: LEDs are solid-state devices with no moving parts, no filaments or fragile glass to break, which eliminates the risk of damage during transportation, installation and operation, even in the toughest environments. And unlike conventional light sources, LEDs are not subject to sudden failure or burnout.

Green: LEDs are considered sustainable because they decrease the need for additional power plants that cause the release of potentially damaging CO2 into the atmosphere. LED luminaires also have an environmental advantage in that they do not contain mercury.

High source efficacy: Efficacy is a term normally used in cases where the input and output units differ. In lighting, we are concerned with the amount of light (in lumens) produced by a certain amount of electricity (in watts). Efficacy = Lumens Per Watt.

Leading LED suppliers have recently introduced substantial advances in LED efficacy. As a result, the lumen output of these LEDs has substantially increased.

The DOE has heralded LEDs as the future of lighting because LEDs have an extremely long life span when compared to fluorescent lighting — in many cases, lasting 10 times longer. LEDs also consume considerably less energy and are clean-burning, which reduces potentially harmful carbon emissions.

Each correctional facility has its own re-lamping security protocol.

In the Chicago, Ill.-based Cook County Jail, cell lights burn an average of 18 hours a day and are turned off for an average of six hours at night. An officer secures the inmate when an electrician comes to re-lamp. This process could last 30 minutes to three hours depending on how many cells are being re-lamped at a time, though each fixture usually takes only 20 minutes to install. When there are multiple cells in the same tier, the officer will typically remove several inmates at once, depending on the tier’s security level.

LED Luminaires and Prison Cells
The selection of equipment and systems for correctional facilities is a challenge for correctional administrators. The equipment and systems selected should match the facility’s desired security, safety and supervision levels. The systems must withstand inmate abuse, be reliable and easy to maintain, repair and operate, and be cost-effective over the useful life of the facility.#

The safety concerns that come with working in a high-risk environment require highly reliable, low-maintenance lighting. And prison operations staff need better, more usable illumination, which is absolutely critical in a security-sensitive setting. The fewer times the cell light is re-lamped, the lower the chance inmates will breach security. The typical safety protocol when re-lamping a cell involves the officer removing the inmate, inventorying the tools before and after the installation, and sweeping the tier once completed.

The most important aspect of an effective preventative maintenance program in a correctional setting is limiting the failure of critical pieces of equipment, such as lighting, that may cause security problems. It is always better to schedule a shutdown of lighting than for the luminaires to go out when least expected.

Of particular importance to prison facilities managers is the fact that energy-efficient lighting, especially LED luminaires, projects a focused beam of light ideal for illuminating prison cells and monitoring inmates. LED lighting is also well-suited for tamper-resistant lighting boxes, meaning they are both high-performing and safe for inmates.

While the primary goal of corrections facilities is to keep people outside and inside the facilities safe, sustainability goals and strategies are increasingly being integrated into the corrections community’s policy and planning initiatives.

According to the U.S. Energy Information Administration, lighting accounts for 33 percent of electricity consumed in jails, reformatories and penitentiaries. More state governments are passing legislation to create standards for energy efficiency, solid waste reduction and renewable energy, and while these standards or mandates affect all state agencies, corrections departments are affected in different ways. Some state departments of corrections see these new requirements as a way to save money, limit the facility’s negative impact on the environment and become innovators in the field.

From a sustainability standpoint, correctional facilities are 24-hour, energy-intensive structures that focus on security, with most existing structures built with little regard to efficient lighting, heating and cooling. New models for contemporary building design and existing building retrofits that focus on energy efficiency and conservation continue to emerge. This trend has been driven mainly by federal and state policies and the desire for cost savings in a time of fiscal restraint. “Greening” correctional facilities will lead them to consume fewer resources, create less pollution and provide healthier environments for the users — inmates, staff, visitors and administration.

Safety for inmates and personnel in a correctional facility is of paramount concern to operations managers. However, during this time of ever-decreasing budgets, they must also be mindful of opportunities for fiscal savings to reduce long-term operating costs. Renovations such as LED lighting retrofits in cells or the installation of LED luminaires during new construction are an excellent way to meet both ongoing challenges. Every day in this country, 200 new jail cells are built, providing ample opportunity for LED luminaires to shine.