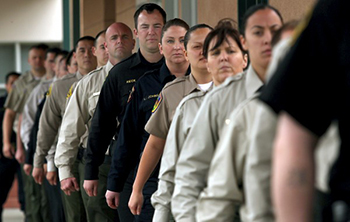 SACRAMENTO, Calif. — Amid struggles to reduce an ever-growing prison population, the California Department of Corrections and Rehabilitation is now grappling with a correctional officer shortfall.

In a Dec. 3 release, the department announced it expects to hire roughly 7,000 new correctional officers over the next three years, due largely to an uptick in retirement numbers. According to the department, more than 1,800 CDCR correctional officers retire per year. This drain on the system has led to an increased, and sometimes urgent, need to fill these positions across the state.

Regardless of the interest in California correctional jobs, hiring is a long, multi-step process; meaning positions likely will not be filled as quickly as they are being vacated. Current requirements for state correctional officers include possession of a high school diploma, proof of United States citizenship, successful drug screening and a documented history of law-abiding behavior. Potential recruits must also be at least 21 years of age at the time of appointment, and legally be able to own, possess or have custody or control of a firearm, or other weapons as authorized by the CDCR.

Should they meet all these requirements, candidates then must pass a written test, a qualifications assessment, physical fitness test, vision screening, a psychological evaluation, a pre-employment medical exam and a thorough background investigation. Upon selection, they then complete a 16-week training academy at the Richard. A. McGee Correctional Training Center in Galt.

Altogether the application and selection process can reportedly take up to a year. Though the process is necessary to ensure both inmate safety and correctional officer preparation, it also makes it difficult to quickly fill open positions, meaning many facilities across the state experience periodic or chronic short staffing. However, once a correctional officer is hired, they are generally offered positions across the state, and are able to select their preferred location based on institutional need and availability.

Several news outlets, including the San Diego Tribune, first reported on the correctional officer shortage in late 2005. On Jan. 1, 2006 an earlier retirement age, negotiated in 2001, went into effect. This new agreement allowed correctional officers to retire at age 50, rather than 55, providing they had dedicated at least 29 years of service by age 49. At that time, Chuck Alexander, executive vice president of the California Correctional Peace Officers Association, estimated the new contracts and benefits could trigger more than 2,000 retirements.

In July of 2006, the Inmate Population, Rehabilitation, and Housing Management Plan report issued by the CDCR stated that the department projected a staffing shortfall of 2,481 positions, 11 percent of all authorized positions, by Oct. of that year. That report claimed vacancy rates were also amplified by “unbudgeted planned workload such as medical transportation and unplanned absences such as sick leave over budgeted levels.” The report said the department aimed to streamline existing testing requirement and expansion of correctional officer training academies. However, authors also conceded that inmate population increases, officer attrition and more efficient use of academies would not alleviate the officer shortage for several years.

Though the state is currently working to reduce inmate numbers in its 34 prisons, as recommended in the 2006 report, efforts have not been significant enough to keep pace with attrition. According to the California Department of Human Resources, full-time parole and correctional officers currently number around 28,500, with an average of 150 correctional officers retiring each month.