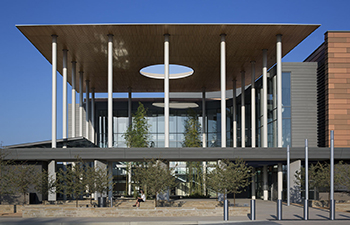 PORTERVILLE, Calif. — The new South Justice Center for the Superior Court of Tulare County debuted last year on an approximately seven-acre site, which was formerly the Porterville Fairgrounds and Municipal Ballpark. The 96,000-square-foot facility brings the county the space and amenities it needs to be on par with other court facilities in the state.

The new three-story building replaces the overcrowded Porterville Government Center and the now-closed Tulare-Pixley Courthouse. Due to the projected population growth in the Porterville area over the next 20 years, the Superior Court of Tulare County needed to create two main service regions: a North Justice Center in Visalia and a South Justice Center in Porterville.

Early on, the previously existing Porterville Government Center was deemed a “critical needs” courthouse in a survey conducted by the California Administrative Office of the Courts (AOC) that determined which courts were in need of new facilities or remodeling, said Jerry Avalos, CCM, EIT, LEED AP, project manager for the AOC.

“The most viable option was to replace the courthouse because the existing one was falling apart,” Avalos said. “The roofing structure was terrible, the security was not up to standards and the cost to upgrade the existing facility was too high.”

The new, $93 million facility is more than 11 times the size of the previous Porterville facility. It consists of nine courtrooms, judges’ chambers, jury deliberation rooms, support services, clerks’ offices and work areas, public walk-up windows and queuing. A detainee holding area, with holding cells for 85 inmates, and a sallyport were also included in the project.

The project’s contemporary design — created to achieve LEED Silver — and prominent location make it a landmark building for the area. The front covered courtyard provides a shaded outdoor gathering area with benches for public use, engaging the local community. The large entrance plaza in front of the building allows the public to use walk-up windows, where they can obtain information and pay fines without having to enter the building and pass through security — a very unique feature for a courthouse in California.

The design also brings lots of natural light into the facility, with large expanses of glass that connect the interior circulation pathways with the courtyard and allow for easy way finding. The second-floor jury assembly room even overlooks a green roof.

The courthouse features a design that focuses on easy-to-use, networking enabled systems that require minimal support and maintenance. It is one of the first in California equipped with a sophisticated audiovisual (AV) system allowing off-site monitoring via a statewide communication network. This enables functions like payment processing reports, security operations, and AV operations to be performed off site, eliminating the need for on-site IT staff and reducing the operating budget for the project’s user. With two separate systems, one for non-detention level spaces and one for the Sheriff Department’s detention areas, the facility uses cameras and touch screens to provide enhanced security throughout the complex.

“The building is equipped with sophisticated security, audiovisual and transaction systems that allow the building to be monitored and controlled remotely,” said Lars E. Fredrickson, LEED AP, senior project manager for Sundt Construction. “It’s a web-based technology that allows the IT department for the courts — which is not on site and is located at the main courthouse in Visalia — to be able to look and see what’s going on with the building and to make adjustments remotely.”

Fredrickson added that the audiovisual systems within the courtrooms are touch-screen based, which allows for various courtroom scene settings. For instance, Scene 1 creates a setting in which blinds and a projection screen come down. There are various scenes that can adjust the courtroom atmosphere depending on the evidence being presented.