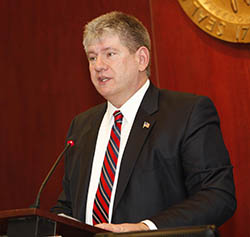 DETROIT — Wayne County Commissioners have scrapped plans to relocate the county’s jail to the vacant Mound Road Correctional Facility by a vote of 12-3. The Oct. 16 decision will narrow the board’s focus to either completing the half-finished downtown jail or renovating other existing correctional facilities.

Construction on the $300 million downtown jail on Gratiot Ave., which began in September 2011, originally came to a halt in June 2013 when costs ran tens of millions more than originally budgeted. The Mound Road Correctional Facility had been proposed as a possible alternative site for the new jail complex. However, the location offers aging facilities, including one building that is 90 years old, is located nine miles from downtown Detroit and is not currently serviced by public transportation.

Moving operations to Mound Road was previously estimated to cost the county up to $260 million more than finishing the Gratiot Ave. site, as it would also require constructing a new courthouse and juvenile facilities, as well as extensive prison renovations.

“The numbers never added up,” said Commission Chairman Gary Woronchak (D-Dearborn) in a statement following the vote, “and that was without even considering whether Mound Road was a practical location for the county’s criminal justice operations.”

Though the commissioners’ statement was careful to say that the decision “does not answer the overall question of how and where to complete the jail” and “leaves open the possibility of a complete renovation of the existing jails, aside from the option of finishing the project on the Gratiot site,” Woronchak maintains that completing the Gratiot Ave. project remains the most practical option.

“We’re not at a point where we’re trying to decide where to build a jail — that was decided several years ago, and we have $160 million of taxpayer money invested in that site already,” Woronchak said in a statement. “Any alternative to that would have to make sense financially for the taxpayers we represent.”

The county had also entered into an agreement in December 2013 with Rock Ventures, owned by Quicken Loans Inc. founder and chairman Dan Gilbert, to sell the partially finished jail and several other justice properties for $50 million, according to a statement issued by the commission. However, that plan also required a six-month study and was contingent on whether moving to the Mound Road facility was even feasible for the county.

In a statement issued to Crain’s Detroit Business, Rock Ventures stated that the firm appreciated the commission’s interest and openness in seeking the best outcome for the complex. However, the company added, “"Ultimately, the right solution will responsibly balance the needs of the county and its constituents with the economic development and job creation opportunities that this important gateway to downtown represents. We remain convinced that the correct solution does not include a new hulking jail on the Gratiot site. This decision is too important to the future of our city, county and region to miss another opportunity to do the right thing."

The county will continue to work with all project stakeholders to “define the best path forward,” according to a statement.