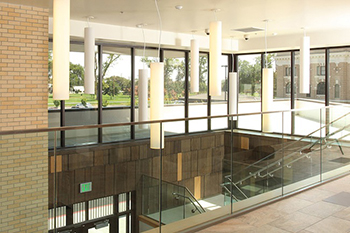 PASCO, Wash. — The Franklin County Justice Center in Pasco recently completed a 56,000-square-foot addition and major renovations to its existing space. Inmates were moved into the new wing in April, while the project team worked on the renovations, which were completed earlier this fall.

The about $20 million facility now meets the needs of the area’s growing inmate population, and features a total capacity of 334 beds. The population had tripled, and the jail had been over capacity for the last 20 years. Recent population growth was wearing on the jail that was originally built in 1986 and was never meant to hold so many inmates. Its original capacity was 105, but the jail was holding an average of nearly 200 inmates before the renovation project, Sheriff Richard Lathim told the Tri-City Herald.

The project added a whole new wing, which included 208 beds, as well as remodeled the existing space. The area that once was used as the kitchen, laundry and medical facilities is now a much larger booking center, and those facilities are now located in a larger, more functional space in the new wing. The new wing also houses two courtrooms and a new 10,000-square-foot sheriff’s office that are completely contained. Inmates are never in contact with the general public and are walked down a private hallway, where they are then held in a court holding room before heading to trial.

Lathim said having this additional area makes it easier for the jail to function properly and allows officers to more easily do their jobs, KAPP TV reported. For example, the new facility has two, dormitory-style holding cells for inmates awaiting trial, so the sheriff’s department no longer has to mix them in with the rest of the population. The holding cells can hold up to 14 and 10 people, respectively. The area also has a room where officers can give suspects Breathalyzer tests before they are brought into the jail.

The project also included technology upgrades such as video and sound recording in one of the interview rooms and high-tech storage for evidence in the sheriff’s office. There are also monitors in the visitation lobby for inmates to Skype with visitors from their cellblock. A new control center looks down into the new jail’s seven pods, which now hold four inmates per cell, as opposed to the older ones, which only hold two. Ten video monitors in the control room also allow officers to see what’s happening in the old jail, as well as the courtrooms, via the justice center’s more than 200 security cameras..

Plumbing improvement and energy-efficient heating and cooling were added to the old part of the jail. Because of the upgrades, the energy costs for operating both buildings that make up the jail cost the same as operating the old one.

Seattle-based LCA+pH LLC served as the architect on the project, while Lydig Construction, with offices throughout the Tri-Cities area in Washington, served as the construction manager. This project is adjacent to the Franklin County Courthouse Historical remodel, also completed by Lydig.

In 2011, voters approved a 30-year, 0.3 percent public safety sales tax for the project, reported the Tri-City Herald. The county’s share was $16 million, while the county paid $3.5 million for the municipal court section.