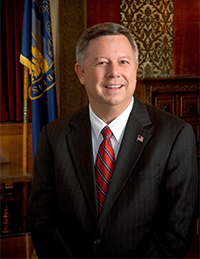 The committee was established following several murders committed by Nikko Jenkins, a former mentally ill inmate who had just been released. The circumstances of Jenkins’ confinement and release led the committee to further examine the department’s use of segregation and the availability of mental health services throughout the Nebraska Department of Correctional Services (NDCS).

The bi-partisan committee subpoenaed thousands of pages of documents from a number of state offices and conducted hearings with correctional and parole officials, as well as with Gov. Dave Heineman. Committee members emphasized that the goal was not to exonerate Jenkins, but to “determine to what extent did the circumstances of Jenkins’ confinement and release contribute to…these tragic murders.”

Testimony given by Dr. Eugene Oliveto, a contract psychiatrist who treated Jenkins, described the inmate as a highly troubled individual who received his first mental health diagnosis at age eight and began his first prison sentence at age 17. There, he served approximately 60 percent of his incarceration in 23-hour a day segregation. Though Oliveto and other mental health professionals recommended Jenkins receive intensive long-term treatment, he was never placed in an appropriate facility and was released without mental health support or supervision.

“The Committee is of the opinion that a more exhaustive examination of the availability of mental health care in Nebraska must be undertaken by the Legislature,” committee members wrote in the report. “In the meantime, the Committee is comfortable concluding that the state must have a secure state of the art facility for the dangerously mentally ill.”

“We need to start by correcting the lack of treatment facilities that we have and the treatments that we have inside the correctional institution,” added Sen. Les Seiler at the press conference announcing the report findings.

Additionally, the committee found that the Department of Correctional Services focuses on expediting the movement of inmates out incarceration and keep those inmates from returning as a means to control overcrowding. Though members noted the stage for overcrowding was set by a generation of “tough on crime” policymakers, ultimately members placed blame for the conditions that lead to Jenkins’ mishandling and release on Gov. Heineman, stating that the governor’s failure to declare a state of emergency in response to the prison overcrowding issue, as well as his decision to not build more bed space, resulted in a culture of early release even in the face of potential public threats.

“The absence of leadership and the culture at the Department of Corrections compromised public safety,” said committee leader Sen. Steve Lathrop at the press conference. “Almost every one of the problems that we looked at, besides Jenkins, go back to overcrowding.”

The committee recommended that the governor declare a correctional system overcrowding emergency whenever the population reaches 140 percent of design capacity, and that Department of Corrections Director Michael Kenney not be retained by the next administration. It also determined that the actions or inaction of Director of Records Kyle Poppert, Assistant Behavioral Health Administrator Dr. Mark Weilage and Deputy Director of Programs and Community Services Larry Wayne warrant termination.

Though the committee members do not have the power to enact their recommendations, members stated that they hope their report will be taken into consideration by the incoming administration.