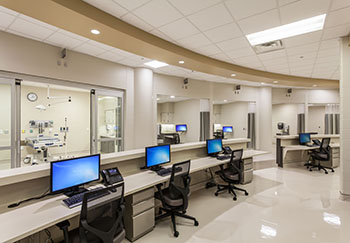 In recent years, the line between correctional facilities and mental health facilities has blurred. Jails and prisons are now some of the largest de facto mental health providers in the country, and many county jails in dense metro areas are seeing more inmates in need of mental health services. However, as inmate populations age, providing both basic and more advanced medical care is also becoming a major concern.

The Dallas County Jail, which manages an average daily population of approximately 6,000, felt the crunch on both ends of the health spectrum. The facility recently completed a state-of-the-art renovation project to provide a wide variety of health services on site and, in turn, has set a new national standard for inmate care.

Housed in the basement, ground level and first floors of the jail’s Lew Sterrett North Jail Tower, the new medical and mental health facility offers a variety of services that simply weren’t possible in-house prior to the project. The modern space includes a new pharmacy, a comprehensive mental health unit, both male and female infirmary wards, telemetry beds, a number of negative-pressure single cells for inmates with airborne illnesses such as tuberculosis or measles, a step-down unit for inmates completing their treatment and upgraded equipment for conducting a higher level of care and testing on site.

McMillan: A phased medical project in an existing and operating jail with a fully functional pharmacy was a challenge in itself, and existing conditions presented many problems for the engineers. The basement and ground floors were mostly open, but the first floor had an upper mezzanine with layers of existing ductwork and piping that were associated with smoke purge for the upper floors. Serving upper occupied floors, this ductwork could not be removed so very careful coordination of all of the new ductwork, piping, conduit, etc. was required. All of the design and coordination was completed in Revit and most conflicts were identified and resolved during design.

Existing ductwork and piping also impacted ceiling heights throughout the build-out and the team had to look at each space individually. In some cases, secure soffits were provided to enclose ductwork and piping. An accessible rear chase design was incorporated to maximize access to plumbing flush valves and other system components.

Q: What considerations must be made when designing spaces specifically for infirm or mentally ill inmates as opposed to spaces for the general population?

McMillan: From an engineering standpoint, the devices must always be maximum security in this environment and built to take abuse, resist tampering, and not be readily accessible to the inmate/patient, if possible. An added measure is usually taken with mentally ill inmates/patients and suicide-resistant devices provide further deterrence and protection. This is true for air devices, lighting and plumbing fixtures.

Aside from the jail and security aspects of the project, this is still a hospital environment, so all pressure relationships, air quality, odor and humidity control, etc. was critical to the health of the inmates as well as the staff.

Q: Does the facility also improve comfort and safety for medical staff?

McMillan: Absolutely. Systems are standalone from the existing tower system with dedicated cooling, heating, pumping, building management and air handling systems. Temperature and humidity control are key to comfort for inmates and staff alike (and to the control of inmates), and a state-of-the-art building management system dedicated to the med mod helps insure acceptable levels at all times. All of these systems are also integrated with the smoke purge system and sequences of operation to operate in normal and emergency modes.

Q: Why you feel this project was particularly successful?

McMillan: The engineering and design — particularly smoke purge — were considered to be very successful in several ways. The smoke purge system was very complicated and involved more than 20 independent smoke zones that were integrated with the fire alarm system and the building management system. This system was automatic based on detection of smoke in the zone of alarm, but could also be overridden manually by firefighters and a new panel. Room-by-room pretesting by the team and the county fire marshal proved that smoke detection and smoke clearing met or exceeded design and TCJS requirements. This large and complex system took many weeks to test but met all state requirements on the first attempt — a key success for our team and the project and a first for Dallas County.