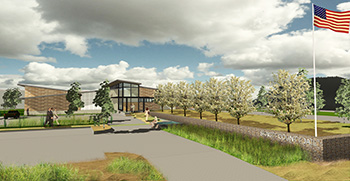 MOUNT VERNON, Wash. — In need of new facilities for more than a decade, Skagit County finally broke ground on a new jail in mid-November.

The county outgrew the existing facility, which opened in 1984 with a capacity of 83 inmates and state funding for 73. The current population is about 2.5 times that, with a daily average of 188 inmates, according to the county website. It is a popular remote design, with housing pods clustered around one or more control rooms, where staff can operate the facility doors and observe inmates. This security method is combined with intermittent cell checks by staff, and it has not changed since the facility’s inception.

The new, 107,800-square-foot facility is modeled off of the South Correctional Entity (SCORE) facility in Des Moines, Wash. — a very successful project that the Seattle office of DLR Group designed and Bellevue, Wash.-based Lydig Construction constructed, according to Bill Dobyns, DBIA, LEED AP, vice president of Lydig Construction. The two teamed up again on this facility.

The jail will house 400 beds, medical and dental care facilities and a courtroom, and it will be built with room to expand to 800 beds in the future. Like the SCORE facility, the Skagit County jail will have housing pods that include dormitory space as well as a very functional central control and admin areas, Dobyns said. It will have brick, concrete exterior with some nicer finishes on the inside for office areas to make it a better work and living place for both inmates and employees, he added.

The facility will also feature state-of-the-art technology from Wi-Fi and video technology to heating and ventilation units. There will also be 146 security cameras, inside and out, as well as the infrastructure to add 110 additional cameras in the future, according to the county newsletter.

Skagit County residents have been vocal about their desire to see more programming in the new Skagit County Jail, according to the county newsletter. The current jail already has the only federally funded substance-abuse treatment program in the state. Plans to expand upon the Residential Substance Abuse Treatment (RSAT) program are in the works as well as introducing other rehabilitative programs such as education, faith-based and employment skills development programs designed to keep inmates from becoming repeat offenders.

The biggest challenge so far was getting funding for the facility, Dobyns said, ever since initial email exchanges were made about the facility’s problems in 1995. A committee was formed in the summer of 2012 to discuss the direction of the project, but there were disagreements between different governments, according to GoSkagit.com. When those differences were resolved, a three-tenths of one percent sales tax to fund the project was finally put on the ballot in 2013 and passed by 73 percent. The site for the new facility was previously an old truck stop, we’ve started work on site; it’s an old truck stop so there has been a lot of contaminated soil and groundwater that had to be remediated.

Skagit County has applied for Ecology grant funds to pay for up to 90 percent of design, cleanup and monitoring costs, according to the county newsletter. Construction on the jail is scheduled for completion in late spring or early summer of 2017.