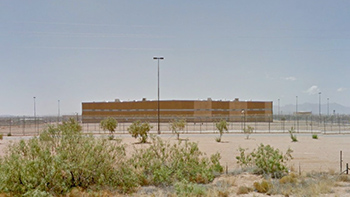 CHAPARRAL, N.M. — A partially finished solar farm located adjacent to the Otero County Prison in Chaparral will soon be completed and begin providing power to the correctional facility.

County commissioners first approved the solar farm project in 2010, and in 2012 the commissioners also approved a 25-acre site lease to house the project. The county originally worked with Spanish firm AIR Cadmos Energy I Corporation, and planned to establish a 2.5-megawatt solar array. However, that plan was later downsized to a 1-megawatt array.

Border Solar of El Paso, Texas, is now working with the county on the project, and was first brought on at the outset to conduct a feasibility study and to examine the site. Over the course of the project the company experienced unanticipated setbacks.

“There were two or three different developers from the start. They were all Spanish companies, when the project was awarded to AIR Cadmos,” said Border Solar Vice President Javier Ruiz at the Feb. 11 board meeting, as reported by Alamogordo Daily News. Ruiz added that the firm began work on the project in 2011, clearing the land and completing underground and foundational work “By 2012 [AIR Cadmos] went bankrupt in Spain and from one day to another, the representatives just vanished,” Ruiz added. “We couldn’t find them in their office in the U.S. nor in Spain. They really went under and so that added stress.”

Following the collapse of AIR Cadmos, Ruiz told the county commissioners that Border Solar attempted to move forward on the prison’s solar farm, but was again stymied by the loss of grant funding in 2012. An additional blow to the project came when a key supporter, Otero County Attorney Dan Bryant, left his position to serve as Lincoln County’s 12th Judicial District judge.

“After 2012, the grant went away so we needed to find a tax equity partner who was going to invest the equivalent money of the taxes,” Ruiz said, according to the Alamogordo Daily News. “[Otero County Manager] Pamela Heltner told me we didn’t have the legal advice to move on when Bryant left in June so we either had to move with the contract we have, which is pretty risky for the investors, and it was. Months passed and we lost the investor.”

These setbacks also impacted the company’s success seeking financing from other banks, which viewed the project as too great a risk. Border Solar had already put approximately $1 million into the project.

“We feel sorry for you that you got involved with this group. It’s unfortunate that they went bankrupt and you got caught in the middle,” County Commissioner Ronny Rardin told Ruiz at the February meeting, according to the Alamogordo Daily News. “Do we go out to RFP and move forward? I think the answer is, for me, yes. How we do that is yet to be determined through our purchasing department and our attorney.”

Considering Border Solar’s financial investment in the project, Rardin added that the project should proceed, possibly under a Request for Proposal format. Currently the total estimated cost of the solar field is $3.2 million.