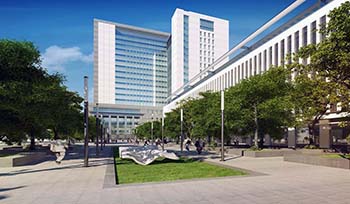 FORT LAUDERDALE, Fla. — The new Broward County Courthouse is scheduled to open this summer, about a year after the original projected completion date. Construction on the about $245 million courthouse began in August 2012.

The new, 20-story courthouse is designed to create an efficient, ageless aesthetic appeal and is being constructed west of the existing courthouse on what was formerly the judicial parking garage. It will feature more than 70 courtrooms in a campus that also features a county office building, two other courthouse buildings, an energy center and parking garage. It will be registered for LEED Silver certification and include 105,000 square feet of glass walls. Locally based Cummings General Contractors is serving as the general contractor, while the courthouse was designed through a joint venture between Los Angeles-headquartered AECOM; Heery International, headquartered in Atlanta; and locally based Cartaya and Associates Architects.

Construction delays and price increases caused the Broward County Commissioners to approve an additional $822,336 in January to help complete the work, reported SunSentinel. Since discussions about the project began, the project cost has increased from about $203.5 million to the current $245 million price tag.

A large part of the price increase is because of a mechanical system change and addition of a 500-car garage; however, in January, another issue arose. A pedestrian bridge designed for inmate transfers from the jail to the courthouse didn’t connect properly to the new courthouse tower and required additional work.

The 500-car secure parking garage project will also include a public plaza and public artwork being built on the current central and east wings of the Broward County Judicial Center. The public art project will be installed in the garage’s breezeway pedestrian connector between the plaza and the Riverwalk. The about $15.5 million project is scheduled for completion in 2017.

Several renovations of the existing Broward County Judicial Center will also be underway after the opening of the new courthouse tower. Renovations to the second, fourth, fifth and sixth floors of the complex’s East Wing will also include renovating the existing restrooms, mechanical rooms and building systems. The about $12 million project is scheduled for completion in 2018.

Last but not least, the complex’s existing, 69,000-square-foot Mid-Rise building will also undergo renovations in accordance to LEED guidelines to update its first, second third and fourth floors. For example, the first floor will be reconfigured to accommodate the probation staff (currently located on the second floor) and the Clerk of the Court Child Support to the building entry on the ground floor of the building. This project is estimated to cost $10.9 million, and construction dates are still being finalized.

This project was chosen as one of Correctional News’ 5 Projects to Watch in 2016. To see the list of projects, click here.