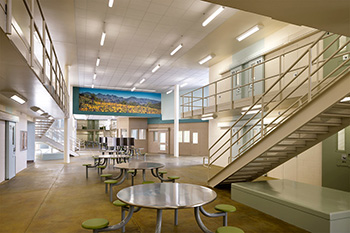 After completing site visits and interviews with both inmates and staff, the jury found the San Diego County Sheriff-operated facilities — which also hold longer-term, non-violent felony offenders in accordance with AB 109 realignment — largely fail to provide adequate opportunities for exercise and visitation as well as offer limited access to educational and vocational training, according to the report.

Even with a significant amount of state funding, which in FY 2015-2016 was roughly $33 million, it appears limited changes have been initiated to accommodate AB l09 inmates, who serve longer sentences in county jails, according to the report. “While the Sheriff’s Department is committed to re-entry programs, most of these opportunities are available to inmates only in their last six months of confinement,” the report stated. “Years spent incarcerated with little mental or physical stimulation will undoubtedly have negative consequences on long-term inmates.”

Another one of the jury’s concerns was the lack of adequate space and equipment for inmate exercise. Only one San Diego area facility, Vista Detention Facility in Vista, provided proper footwear for exercise, and at several of the male detention centers, staff told jurors that basketball hoops were eliminated because of potential ankle injuries. In response, the jurors made a formal recommendation to make shoes appropriate for recreation and exercise available to all inmates.

In contrast, jurors were largely pleased with the facilities offered at the 832-bed, female-only Las Colinas Detention and Reentry Facility (LCDRF) in Santee, reporting the facility more closely resembles a school campus than a jail. The housing facilities feature exercise areas larger and better equipped than those in any men’s facility, and LCDRF also offers a large, colorful dayroom for more frequent contact visits with family. Jurors noted that this area helps create a feeling of normalcy and optimism lacking at the men’s facilities.

Meanwhile, the jury expressed concern for inmates in male detention centers, which lack family-friendly waiting areas and only allow one 30-minute, no-contact visit weekly. “Interaction with family and the outside community should be encouraged to ensure a successful transition back to society,” jurors wrote.

Jurors’ management and oversight concerns, however, might not be so easily addressed. For example, the group found that the Sheriff’s Department is not formally evaluating the success of most inmate programs. “Moreover, there seems to be disagreement over what constitutes recidivism and how it should be tracked,” jurors wrote.

Facility staff spoke often of the importance of using evidence-based practices, according to the report, however jurors noted, “it appears there is very little systematic gathering of evidence to determine which practices are effective and deserve continuation.”

The jury recommended that the Sheriff’s Department establish metrics to evaluate programs offered to inmates and establish a consensus on the definition of recidivism in order to begin tracking outcomes.