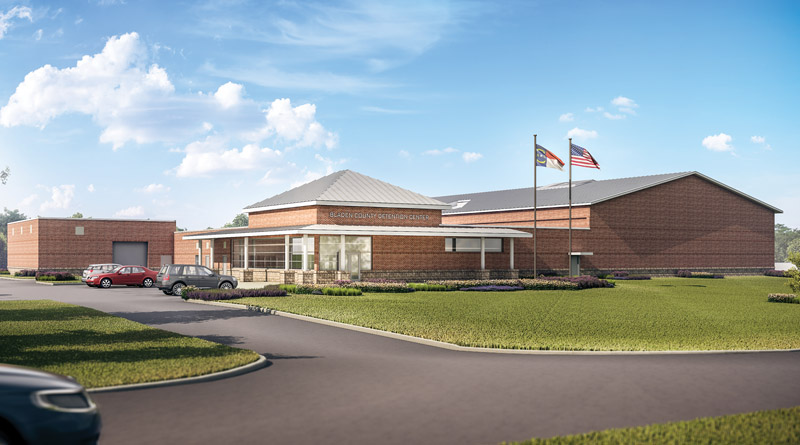 ELIZABETHTOWN, N.C. — Construction on the new Bladen County Law Enforcement Center in Elizabethtown was completed on July 1. The new law enforcement center includes a new county jail and new Enhanced 911 (E911) facility, which will replace the current 55-year-old jail. The new jail will house more than twice as many inmates as the previous facility with an initial capacity of 220 beds with core size spaced for an ultimate capacity of 300.

The new facility was constructed to replace the outdated and overcrowded Bladenboro County Jail in Elizabethtown, according to Dan Mace, justice sector leader at Moseley Architects and principal on the project. Inmates will be transferred to the new facility on August 29, approximately 60 days after completion of the new facility. In the past and until this impending transfer of the inmates is complete, the procedure for the old facility has been to export inmates to facilities in other counties in order to be housed due to size constraints. In addition, the facility was not meeting current life safety standards and was not operationally efficient, according to Mace.

“The new facility was built as an effort to consolidate all operations (the sheriff’s law enforcement center, E911 and jail) under one roof and to alleviate the issues and liabilities the county was suffering from,” said Mace. “Additionally, the design of the new facility was focused on reducing staff and making the facility as ‘staff-efficient as possible,’ while still being safely operated.”

The facility has six housing units — five male pods and one female pod, with 36 beds in the female pod and 186 spread throughout the five male pods. Additionally, it features an expansive medical treatment facility and video conference center for inmate visitations. North Carolina jail standards require natural light in jail housing areas, which is introduced via large natural skylights in the roof.

Steel prefabricated cells provided by Steelcell of America in Baldwin, Ga., were used in the construction of the jail, one benefit of which includes lighter weight than the more traditional concrete cell, according to Mace. Additionally, the use of these steel modular cells makes for a smaller demising wall between cells, which saves square footage. Usually there are 8-inch CMU blocks or 6-inch precast dividing the cells, according to Mace, but the use of the modular cells means only 2 inches between cells, which saves aggregate square footage, reduces the building perimeter and reduces the overall building footprint.

Another unique feature of the new jail is a central elevated control tower that enables staff to observe all of the activity of the facility, with 360 degrees of windows looking into the six different housing units. The windows are built with glass-clad polycarbonate with a mirrored film that allows staff to see out while preventing inmates from looking in. The design is an indirect podular set-up, according to Mace, with all of the beds radiating off of the elevated control tower in a spindle concept.

The use of building information modeling (BIM) software called REVIT helped the design team create and fine-tune the facility design before construction began. The drawing platform allowed the design team to draw everything in three dimensions (rather than the usual two) ahead of construction, which gave the design team the ability to show updates to the owner throughout the design process and give them a virtual walk-through in real time, according to Mace.

To read the entire article, check out the July/August issue of Correctional News magazine.