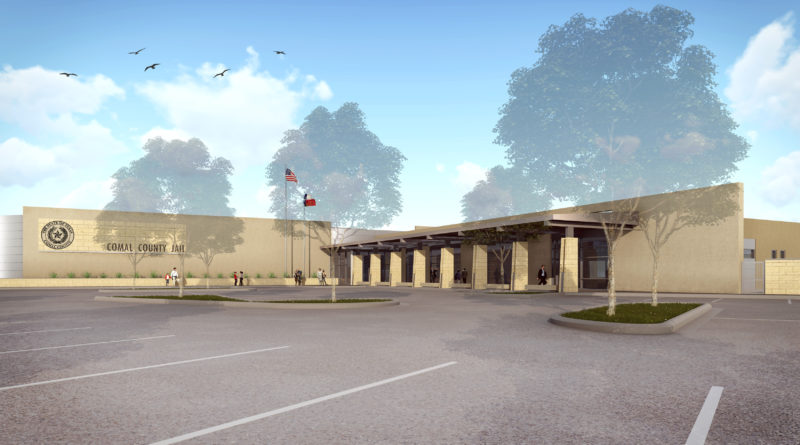 Construction will commence in late November, and completion of the new jail and renovated Comal County Sheriff’s Office is projected for early 2020. Photo credit (all): Courtesy of HDR and ERO

NEW BRAUNFELS, Texas — The new Comal County Jail, which has been in the programming and design phase since August 2016, will now finally be built in New Braunfels. Construction will commence in late November, and completion of the new jail and renovated Comal County Sheriff’s Office is projected for early 2020.

Yates-Sundt JV invited bids for site preparations and utility work at the site — adjacent to the county’s Fellers Law Enforcement Center on West San Antonio Street — with bids for the first phase of construction accepted through Oct. 31.

The total cost of the project is $76 million, with $62 million of the budget allotted for construction costs. The first phase will include 155,000 square feet of new construction that will house 589 inmates. The new jail will replace the existing 337-bed facility, with future plans to expand to 900. In addition, the new facility will have a booking area with temporary holding cells, support areas, a detention administration area and visitation space.

The design also allows the existing jail to be renovated into a new law-enforcement facility that will provide enhanced administration, patrol and investigations for the fast-growing county, according to Halden Tally, AIA, LEED AP, justice principal at HDR.

The new detention facility features a wide range of housing-unit types to accommodate the various custody classifications, both male and female, according to Tally. The design will accommodate 408 men and 124 women, with housing options including a range of varying custody levels — separate, single, double occupancy, quad cells and open dorms. Supervision will include a second-level control room overlooking housing pods and exercise yards.

“The design and classification of inmate housing addresses the unique requirements for housing inmates with issues related to mental health,” said Tally. “General population housing for these inmates has been given consideration to allow proximity to observation and staff trained to address these needs.”

Once Phase 1 is complete and inmates have been transferred, the interior of the existing jail will be demolished and renovated as offices for the sheriff’s personnel. Phase 3 will mean the demolition of the previously occupied sheriff’s office area will be renovated into additional office space. Upon completion, the sheriff’s office will have about 68,000 square feet.

“To this point in the project, Broaddus is the most proud of how the entire project team has worked together to think outside the box and bring innovative design solutions to a most important project for Comal County,” said Swies. “Our team has been focused on form and function since day one, and our project team is proud to say that we have spent the past 14-plus months holding ourselves accountable for achieving just that for our local community and taxpaying residents.”