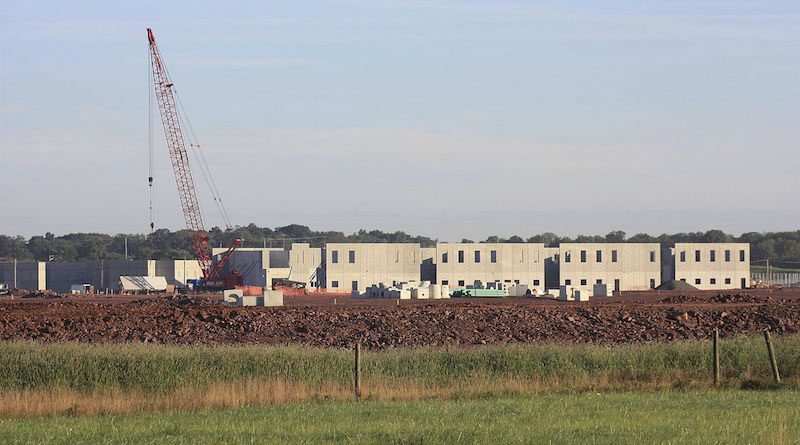 SKIPPACK, Pa. — The precepts upon which modern laws are predicated are ancient. How lawbreakers are punished, however, is often infused with cutting-edge technology. Consider the amenities of Pennsylvania’s newest state prison, the State Correctional Institution at Phoenix (SCI-Phoenix) in Skippack, presently under construction.

The new facility, which features a digital surveillance system, air conditioning and state-of-the-art kitchen and laundry facilities among other upgrades, will replace a 78-year-old prison in nearby Graterford. The older facility’s decrepit infrastructure made it costly to maintain whereas the “Phoenix,” as the new facility is known colloquially, is estimated to cost $10 million less to operate.

Of course, to achieve that savings, the Phoenix needs to open and at present writing, it’s two years behind schedule. The present prospective opening date is Summer 2018.

The facility is designed in a manner that will make it 45 percent more efficient than comparable structures and is likely to save the Pennsylvania Department of Corrections $1 million a year in energy costs. In total, the Phoenix will cost $350 million and house 3,940 inmates (as opposed to the maximum capacity at Graterford which is 4,215). These inmates, who are mostly men apart from a small women’s unit also on campus, will be housed in cell blocks arrayed in units of 282 men each. The housing arrangement is an effort to be grouped depending on their individual rehabilitation needs.

As Corrections Commissioner John Wetzel told the The Morning Call, a local news service, about 75 percent of inmates have addiction issues and a third of new inmates are diagnosed with a mental illnesses. The Phoenix will also absorb Graterford’s roster of 21 death row inmates currently awaiting execution.

Moreover, the Phoenix will features a ultra-modern hospital facility provisioned with equipment that will help medical staff to address injuries would otherwise send inmates to a hospital emergency room.

The new facility spans more than 25 buildings, including 15 for inmate housing and administration, bounded by a 30-foot concrete wall with 1,350 cameras capturing every aspect of the new facility. Sensors are also set to trigger alarms in the event of an inmate trespassing into restricted areas. Also, locks at the Phoenix can be operated both remotely and digitally. The facility will also maintain its own power station and emergency generators so electrical outages are not a threat nor are cyber attacks, since the entire operation is maintained autonomous of the grid with no connection to world outside.

Cameras also figure into another aspect of the inmate experience — visitations. A video chat system, otherwise known as “virtual visitation,” allows family members and other visitors such as attorneys to communicate with inmates, allaying travel costs and making maintaining interpersonal connectivity more fluid.

“In essence, it shrinks the world,” Phoenix Superintendent Cynthia Link explained to the Morning Call. “It keeps that family bond, that contact going, and that’s really important.”

Walsh-Heery Joint Venture, a partnership between Chicago-based Walsh Group Ltd. and Heery International of Atlanta, is working to complete the project. St. Louis-based Wiegmann Associates was the engineer of record for the mechanical portion of the project.