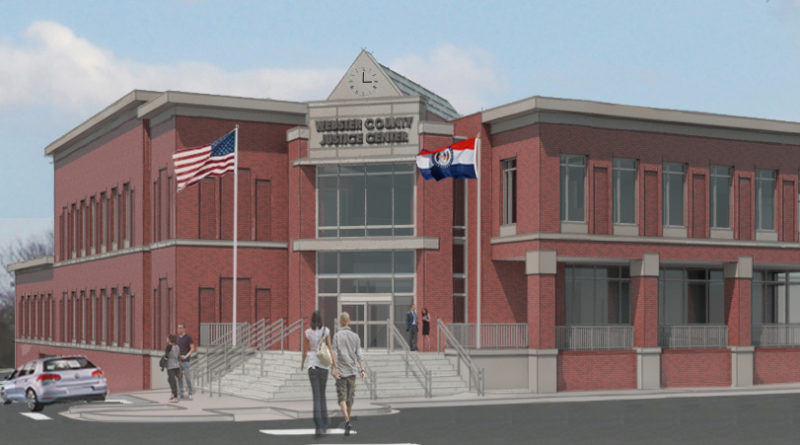 HMN Architects Inc. of Overland Park, Kan., is the architect on the project, with Sedalia, Mo.-based Septagon Construction serving as the construction manager. Design for the 56,000-square-foot building began in summer 2015, with an overall project budget of $18.5 million. The justice center is expected to be ready to open for use in spring 2019.

The overall goal of the project was to replace the existing jail and sheriff’s office, and to add a criminal courtroom. The new facility will replace a historic building in downtown Marshfield, where the owner wanted a facility with a high-end design featuring brick and stone on the exterior, according to Adam Kuehl, architect and project manager at HMN Architects.

“This project is special because the owner demanded high-quality architectural design and was highly involved in the design process,” said Kuehl. “Working through the design, I have become good friends with the sheriff, county clerk, prosecutor and presiding commissioner.”

The project brought with it some challenges, such as designing the facility on a downtown site with limited space available, and the need to maintain the aesthetic to be consistent with the historic downtown, in addition to designing a facility of this scope within the allotted budget, according to Kuehl. In addition, two of the three commissioners were replaced during the design process for the project and thus caused a delay as well as a change in project scope.

The new facility will include a 110-bed jail that is expandable to 150 through the construction of two additional dayrooms as part of the design. The housing pod is constructed with precast concrete walls and steel cells. In addition, there will be a sheriff’s office, courtroom and support functions. The project includes LED lighting, an energy-efficient mechanical system, high U-value glazing and continuous insulation with air barrier, according to Kuehl.

The building is a three-story structure, with the jail and jail-related functions on the first floor, the new sheriff’s office on the second floor and a 75-seat courtroom and court support on the third floor, according to Kuehl. The grade of the site is set up so that jail business enters on the first floor, and the sheriff’s office and court business enters on the second floor after climbing the courthouse steps.

The design of the new justice center will incorporate multiple phases that will include the addition of the courtrooms, court services as well as 120 more beds. “HMN starts planning all new facilities with a blank sheet of paper and designs the facility for each client’s specific needs and related to types of detainees,” said Kuehl. “Provisions for special needs detainees such as mental health, communicable disease or transgender have been planned into the facility. The new facility is planned to meet the needs of Webster County for the next 20 years while being constructed as a 50-year building.”