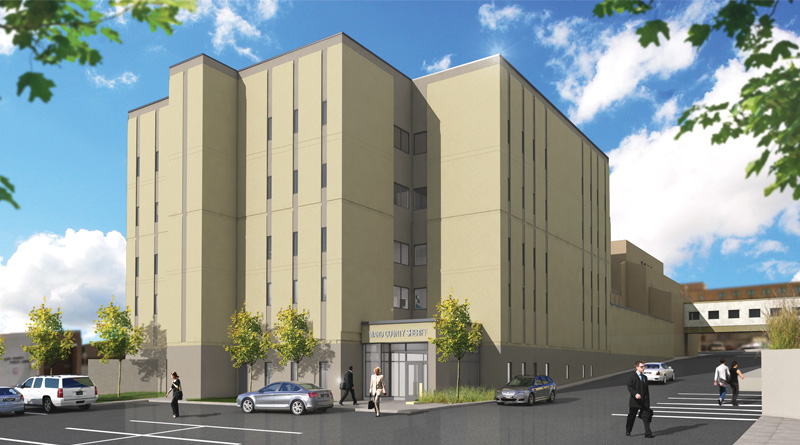 With the WCDC, the intent was to create a campus of county buildings that were visually related to each other, but not duplicates. Photo Credit: JLG Architects

MINOT, N.D. — This rarely happens: A large construction corrections project in North Dakota came in ahead of schedule and (drum roll, please) under budget. Welcome to the rarified world of the Ward County Detention Center (WCDC) in Minot, which beat its construction deadline by over six months, with an official completion date of Nov. 3, 2017.

Kudos go to Minneapolis-based Adolfson & Peterson Construction, the project manager, as well as Ward County officials and, naturally, the project’s designer, JLG Architects (a firm with 12 offices concentrated in the northern Midwest) and its design partner BWBR Architects, with offices in St. Paul, Minn. Together, the team ushered in an estimated $40 million jail expansion that looks like it’s at least $1 million less than expected. The 200-bed WCDC and the Ward County Sheriff’s Office has already relocated into the addition, which is attached to the downtown Minot jail building and was originally constructed in the early 1980s.

“This has been a true team effort from the start. The entire design team — including our design partner, BWBR Architects — construction manager, local agencies and the owner have all worked together to ensure this project’s success,” said Amanda Kosior, director of marketing at JLG Architects. “Specifically, JLG and BWBR worked closely during the design phase to manage the client’s budget and risk by incorporating multiple bid alternates into the project. The owner was able to accept two major alternates, which added significant scope to the project, all while staying under the original budget. This, in large part, is attributed to JLG and Adolfson & Peterson working together to foresee and react to potential issues. The same can be said about maintaining the aggressive schedule.”

Of course, accomplishing such a feat wasn’t without its challenges. The originally 1980s-era structure had its peculiarities, including a four-story structural stair and elevator core that compromised smooth flow between the existing and new facility. In short, it had to go and, though difficult, the decision resulted in improved sightlines and generally buffeted officer safety, and made the facility easier to monitor. Jail staff now have the ability to monitor inmates from a central control station through one-way windows that provide visual access to both cell blocks and exercise rooms.

From a logistical standpoint, there were also certain programmatic elements required for the facility to remain operational throughout construction, explained Kosior.

“It was a challenge to phase the construction around this, especially since we completely gutted and remodeled several core areas — for example, the existing intake/booking area and master control room. In order to maintain these crucial functions during construction, we temporarily relocated them — certainly not an easy task,” said Kosior.

Then, there were the restrictions of the original ’80s design — namely space considerations, which informed everything from bed counts to cell widths and construction types. Moreover, the facility is located in a bustling urban downtown area and is part of a complex of county government offices. Managing the redux of the building in such tight quarters was formidable.

“Another peculiarity is that the existing power and low-voltage wiring is buried inside the cast-in-place concrete walls and floor structure. The contractors often don’t know what’s within a wall or floor before they start cutting, which makes things interesting, as much of this wiring is tied to cameras and door controls, two very critical items for jail operations,” said Kosior. “We have managed to avoid any significant outages thus far, and we do have safeguards in place, but it is certainly a challenge.”

Throughout the design process, JLG kept the inmate experience top of mind while also addressing the needs of the facility’s administrators.

“As a baseline, we met all Department of Corrections requirements and guidelines. This included size of jail cells, windows for natural daylight, size of and amenities within the dayrooms, recreation spaces with access to outdoor light and air flow within the cell blocks,” said Kosior. “Other spaces, such as the kitchen and medical facilities that support inmate’s day-to-day life, were also improved by the renovation.”

To wit, now each cellblock has cable television, tables and seats, as well as phones and kiosks operated by TurnKey Corrections that permit inmates to make video calls and even order snack items (inmates have to pay for these services). Likewise, face-to-face visitations will be reserved only for attorney meetings or consultations with clergy. An additional interactive television room provides for remote court appearances by inmates.