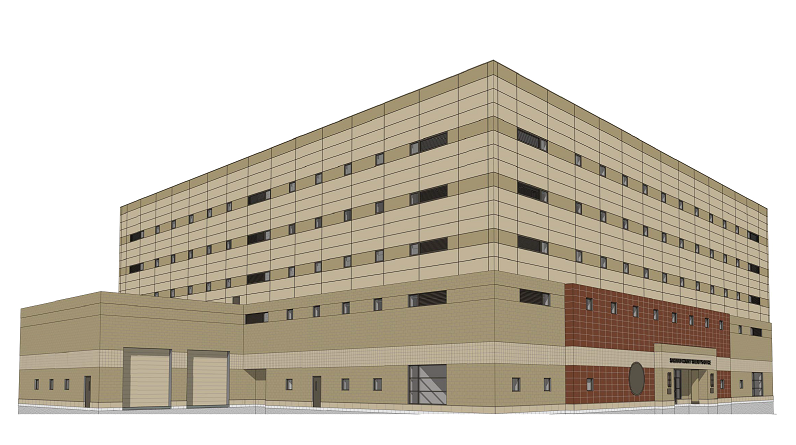 SAGINAW, Mich. — Following years of planning, work on a new $35.8 million Saginaw County jail is about to begin.

County and city officials took part in a groundbreaking for the Saginaw County Adult Detention Center on May 21, according to reports from Michigan’s MLive.com and local affiliates of ABC 12 WJRT and WEYI –MiNBC 25 News .

Construction for the jail is reportedly set to begin this month and be wrapped by November 2019. The new facility will host 511 inmates.  It will be staffed by 43 or 44 correctional officers, instead of the 63 that ran the original jail, according to reports. The new jail will be a direct-observation layout, and due to this design, officers will be able to manage and see the same number of individuals with fewer staff.

Saginaw’s Spence Brothers is the construction manager for the project, and Goldberg Group Architects (GGA), based out of Missouri, designed the jail.

The construction of the new jail will produce about 150 to 200 jobs for the area, stated Herbert A. Spence III, president and CEO of Spence Brothers.

“We are especially thankful to be able to help Saginaw County leaders and the sheriff’s department to make our community safer and continue to thrive by being a part of this very important project,” stated Spence during the groundbreaking.

He added that May 21 was also a special day for Spence Brothers, since that was the day the company was founded in 1893. It has constructed some iconic facilities in the Great Lakes Bay Region, including East End in Midland, Huntington Event Park in Saginaw and the Business Process Service Center for The Dow Chemical Co.

Terry Blanchard, director of client services for Goldberg Group Architects, thanked the crowd during the groundbreaking ceremony for the opportunity to field such a key project in Saginaw County.

The new facility will have about the same number of beds as the current one but will take fewer personnel to operate due to an improved design.

A new jail was needed due to the current Saginaw County Detention Center being nearly 50 years old. It currently houses 513 inmates, but it was originally designed to hold 218, with several additions having been made to it over the decades according to Saginaw County Sheriff William Federspiel.

He said the current jail has numerous shortcomings that range from a subpar ventilation system to safety issues like troubles with keeping jail doors secured.

GGA holds decades of experience in justice planning, design and budget analysis. GGA takes the approach that, with their expertise the total cost of ownership can be controlled — from the size of the facility to staffing and operational costs to long-term maintenance requirements. Their extensive justice portfolio includes law enforcement buildings, justice centers and adult and juvenile detention facilities.

Editor’s note: Temporary delays have been reported with the project due to potentially higher project costs currently being discussed by Saginaw County officials.