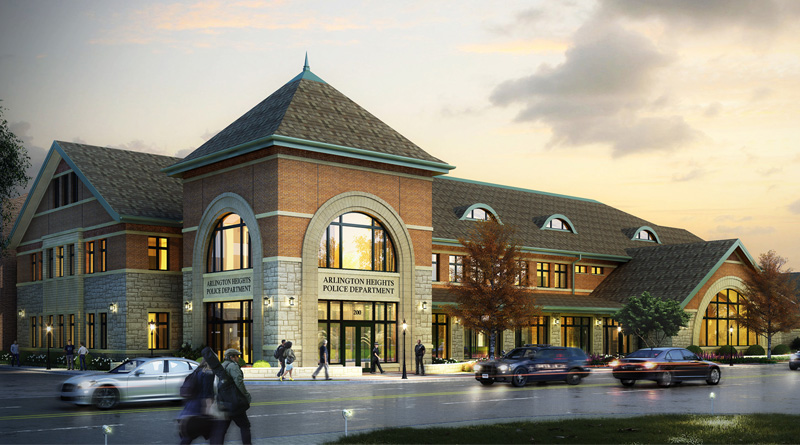 VILLAGE OF ARLINGTON HEIGHTS, Ill. — The Arlington Heights Police Department started off the New Year in its new two-story, 70,500-square-foot facility, putting the finishing touch on its traditional municipal campus.

The department has been operating from a temporary headquarters at 1500 W. Shure Drive during construction of the $27.985 million building.

The new facility was officially dedicated on Dec. 17 and operations began on Dec. 22. A public open house will be planned in the spring of 2019.

“The design relies on different materials to give the station its own personality, while paying homage to the historic character of the village hall and fire station on either side of it,” said Steve Blye, project designer at Legat Architects.

Legat Architects and McClaren, Wilson, & Lawrie Inc. prepared construction drawings for the new police station site and Riley Construction was the construction manager of the project.

The planned layout of the first and second floors of the new police station is designed to promote functionality that will enhance the effectiveness of police services. The proposed layout of the first floor includes a public information desk, booking area, the patrol division and the records areas.

Preliminary design offered two concepts in response to the station’s location between two similarly designed structures: Village Hall and Fire Station 1. One option showed the limitations of simply copying the style of the existing buildings. Option two, the selected option, revealed how different materials would give the station its own personality, while remaining true to the historic look of its neighbors.

Construction of a new police station began in the summer of 2017 following approval by the Village of Arlington Heights Board. The decision process involved multiple specialized studies that were completed over several years along with months of approval meetings.

The new building replaced Arlington Heights’ 40-year-old police station that suffered from dated infrastructure and failing mechanical systems. In addition to space constraints, it would cost millions of dollars just to continue maintaining the police station as a serviceable building because of significant repairs that were needed. Instead of investing millions of dollars into the aging structure that was outdated and inadequate for Arlington Heights’ current policing needs, the Village Board of Trustees decided to move forward on a redevelopment of the building. In planning for a new facility, it was determined that a new, larger station could fit on the existing footprint, which is part of the Village’s municipal campus. Building a new station by using the current site eliminated the costly need to purchase property for a new facility.

In addition to the construction of the new police station, the project also included the renovation of nearby Village Hall. According to Riley Construction, the scope of services for the project included: demolition of the existing police station, site work, utilities, landscaping, construction of the new building, structural, mechanical, electrical, plumbing and fire protection systems, interior finishes, and all other elements necessary to construct the new police station. The scope of services also included off-site improvements to the fourth floor of the Village Hall and renovations at the fire academy to create additional storage space for police records and long-term evidence storage.