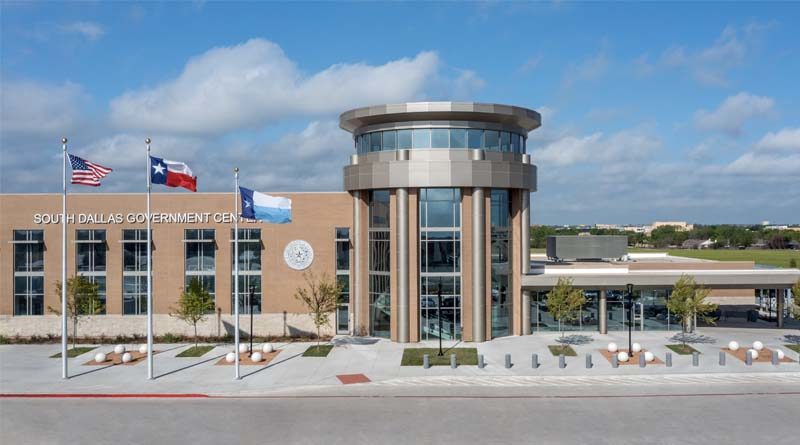 The new $22 million venue is situated on a 12-acre campus and replaces and consolidates three aging facilities under one roof. Photo Credit: KAI

The new $22 million government center is situated on a 12-acre campus at the corner of West Wheatland Road and Polk Street and replaces and consolidates three aging facilities under one roof to house Dallas County’s Tax Office; Veteran’s Affairs; County Constable; Sheriff’s Traffic Division, Dispatch and K-9 Unit; and two Justice of the Peace courts. A new 11,000-square-foot Dallas County Sheriff’s Training Academy was also designed and constructed on the southern end of the campus.

Minority participation on the LEED Silver project exceeded all goals through use of a 100 percent minority finance firm (SIR Capital), African American-owned design firm (KAI) and 50 percent minority general contractor joint venture (Source Building Group/Satterfield & Pontikes Construction). Additionally, the building’s construction included a collaboration with the Regional Black Contractors Association and its “Second Chance” workforce program which trained men and women who have been part of the criminal justice system to learn new transferable job skills utilized by the contractors on the project job site.

“We began with a vision of creating a superb facility that celebrated the legacy of early justice pioneers who served this community,” said KAI President Darren L. James, FAIA. “At KAI, we embody transforming communities through integrated design and construction excellence, and what we wanted to do in this center and this campus was to create a sense of place that was previously an open grass field.”

Public art plays a prominent role in the government building’s socially conscious design. A second-floor gallery features portraits created by local artists of 11 prominent Dallas County judges and constables, plus Supreme Court Justice Thurgood Marshall. On the first floor, a 7-foot by 20-foot mosaic mural titled “Justice For All” by artist Reginald C. Adams has been integrated into the architecture immediately adjacent to the public rotunda. Inspired by the principle of restorative justice, the mural design is anchored by a blindfolded man and woman holding the scales of justice to represent the principle of impartiality in the judicial system. The Dallas Public Library has also partnered with SDGC to showcase photographs throughout the building that depict the lives and challenges of local African American residents.

The facility’s features also include a public walking trail around the property for agility training, food truck parking adjacent to the detention pond, a weight room for the employees and a wellness room for nursing mothers. A 160-foot-tall radio communications tower, kennel for the K-9 Unit, and property and evidence storage for the Sheriff’s Traffic Division were also constructed. The facility’s Dispatch Center was designed as an ICC-500 2015 Storm Shelter that can withstand winds of up to 200 MPH and remain operational during severe weather. The facility will also serve as a back-up dispatch center for the adjacent cities of Dallas and Lancaster.

KAI Enterprises is a national design and build firm providing delivery-oriented building solutions with a diverse portfolio of experience, in-house multi-discipline professionals, and expertise in both design and construction delivery.