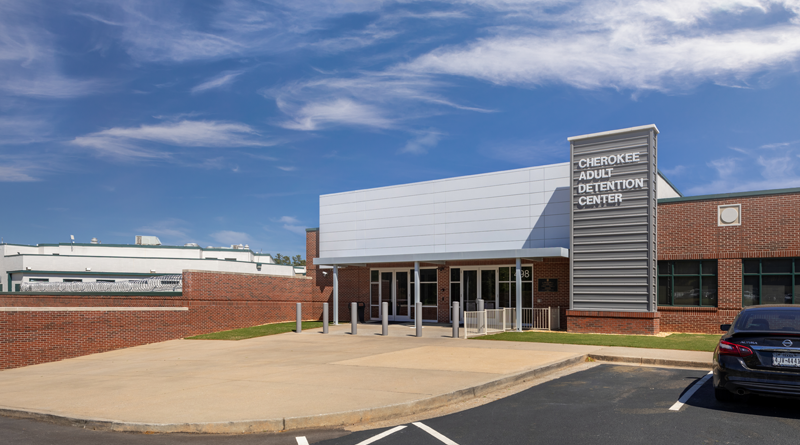 The 225,000-square-foot Cherokee County Adult Detention Center facilities were first completed in 2002, but an expansion was required to keep up with the County’s growing needs. CROFT provided the architectural design and construction administration services for the renovation/new service areas for this project.

Several previously unused areas of the facility were reinstated, including the original main detention entrance that had been unused for a number of years by staff and public but still housed some inmates on the perimeter. This area was renovated and modified so that inmate functions were not interrupted and became the new video visitation site that created a safe and efficient way for visitors to speak with inmates.

Other areas renovated included: the current main entrance, which was given a new façade and now leads to a new secure lobby layout where visitor and Sheriff’s staff were secured until properly cleared. The new lobby created a clear separation for the main corridor eliminating the concern of someone entering without appropriate security clearance.

The existing kitchen was expanded to accommodate the increased number of meals needing to be prepared and the staff dining area was given improved finishes to give it a more pleasurable environment. The main control room was modified to increase the monitoring capabilities of the Sheriff’s staff to view all movement within the detention center. Staff offices were also modified to create a secure staff entrance off the side of the main building.

In addition to the services mentioned above, CROFT also served as a partner to Studio 8 for the housing pod addition and served as the construction administration lead for the 117,000-square-foot, 600-bed addition to the Cherokee County Jail.

CROFT, founded in 2004, is a full-service architecture and engineering firm headquartered in Kennesaw, Ga., with a second office location in Lawrenceville, Ga.