Featured Articles
February 25, 2010February 25, 2010 2174 Views Cell phone, TechWatch, The Redwood Forest Foundation
There are more than 2.3 million inmates in America’s jails and prisons. If they were all in one location, it would be the 23rd largest city in America. Some correctional facilities are, in fact, like small cities. For example, one of the largest prisons in the United States is the Louisiana State Penitentiary with more than 5,000 inmates.
Regardless of size, every jail and prison must deal with infrastructure and utilities. They use water and create sewage that must be conveyed and treated. As a result, maintenance and repairs are important cost items as well as sensitive environmental concerns. 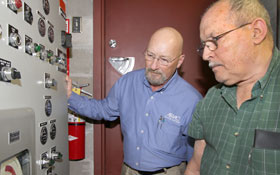 When Clay County, Ind., began planning its new 170-bed jail in 2004, the architects and county officials had an opportunity to address some of the unique infrastructure challenges that corrections officers face. Among the most important was the sanitary sewer system.
Like the staff at most correctional facilities, Clay County’s maintenance personnel spent an inordinate amount of time dealing with clogged toilets at their old jail because insubordinate inmates would frequently flush items down their toilets in order to clog the pipes and create nasty backups.
“At our old facility, inmates would flush T-shirts, belt buckets, small plastic cups and other items down the toilet,” says Clay County Sherriff Michael Heaton. “We would have to have a plumber come in with an auger to remove the obstruction. This created a security situation because we had to remove the inmate from his cell, plus we had to shut off the plumbing for most of the building. It was a huge waste of time and resources.”
Chief custodian Wayne Knox says it usually took more than an hour to unclog a gravity sewer line.
“First you had to remove the prisoner, then you had to pull the stool out, get an auger in there and remove the obstruction, and then replace everything,” Knox says. “You really had your work cut out for you.”
Most of the problems caused by clogged toilets were eliminated when the design team for the new jail chose modern vacuum sewer technology from Airvac Inc. Now, when a clog occurs it can be cleared in minutes without entering the cell.
“Within the chase behind the cells, all the pipes and valves are exposed,” Knox says. “If something does get caught in a vacuum valve, we know about it right away because it continually pulls vacuum, which makes a noise. There also is a call-out notification at the control panel. Every cell has a shut off valve, so we simply shut off that cell and remove the obstruction. The whole process takes about 10 minutes.”
The design of the new low-flow toilet stools and the vacuum pressure within the system make it difficult for inmates to flush items that can clog the line. Many of the larger items they used to flush won’t fit through the smaller orifice of the toilet, and the smaller items are usually sucked through the line at high velocity to a grinder that shreds them into small bits. The effluent is then passed into a vacuum collection tank and later pumped into the city’s municipal sewer main.
Water Conservation
Dave Sholl, vice president of SchenkelShultz Architecture in Fort Wayne, Ind., had no previous experience with vacuum sewers before designing the Clay County facility.
“When researching the project, we found that the new Clay County Jail’s sewer would tap into a sewer main that was already near capacity,” Sholl says. “The existing sewer main would not be able to handle the additional effluent from a traditional gravity sewer in the new jail.”
Sholl’s team looked for a system that requires less water and discovered that vacuum sewers use much less water than conventional gravity systems.
Water usage for a vacuum toilet can be adjusted from approximately three to six pints per flush. Standard gravity toilets use about 1.6 gallons of water per flush, so the jail is now using about a gallon of water less per flush.
Multiply the amount of water saved by the number of toilet flushes per day and the potential for significant savings is hard to ignore. The impact on the local municipal wastewater system and treatment facility is also greatly reduced.

The Technology
Vacuum sewer technology has been around for more than 40 years and is used in cities across the country and around the world. Vacuum toilet collection systems also can be found on all major cruise ships and airplanes.
The heart of an Airvac vacuum system is the vacuum collection station. The system arrives at the customer’s site completely assembled and prewired with the only required electrical connection to be made at the control panel.
The vacuum collection station contains all of the equipment necessary to generate and maintain vacuum pressure within the vacuum piping system, empty the collection tank when full, and provide all system alerts.
When a toilet is flushed, the pneumatic vacuum valve opens and sends the wastewater into the vacuum piping where it is propelled at speeds of up to 18 feet per second to the shredder. The wastewater then empties into a 650-gallon collection tank where it is held until a sufficient volume has been collected. When that predetermining level is reached, the wastewater is pumped into the city’s municipal sewer line or to a wastewater reuse system.
In addition to using less water, the technology requires very little electrical energy, is self-contained and is virtually odorless. Because operation of the vacuum collection system is monitored by the control panel, leaks occurring anywhere in the system can be easily identified and quickly isolated and repaired. Also, leaks in a vacuum piping system are drawn into the piping, not pumped out of the system, thereby eliminating drips and puddles of wastewater — problems that often are found with conventional gravity wastewater systems.
Installation
Vacuum sewage collection uses smaller diameter piping compared to conventional gravity piping, providing lower material costs and labor installation costs. Unlike a conventional gravity-flush toilet, the Airvac vacuum toilet not only flushes down, but it can also can flush horizontally or even up to an overhead piping connection.
This allows for flexibility in the design layout of new construction and expands the possibilities for renovation or expansion projects. Piping also can be installed independently of slopes, thereby allowing for flexibility in the routing of pipes around stationary objects, such as air ducts, wall openings or other utilities and equipment.
“Because it’s not a gravity system you don’t have to worry about slopes,” Sholl says. “You can run PVC piping around columns or pipes. Because we designed the vacuum system piping to be included in the chase behind the cells, we didn’t have to worry about underground piping. That was a big help in expediting the construction process.”
At Clay County Jail, the staff does a quick tour of the chases each morning to inspect the vacuum and water lines and check the central vacuum station where the shredder, collection tank and control panels are located. The entire process takes only an hour, which generates a timesavings and a reduction in maintenance costs.
Jailers also like the convenience of vacuum sewers when there is a shakedown in the facility. They can prevent inmates from flushing items down the toilet by simply shutting a few valves, and they can isolate specific cells or blocks without shutting off the sewers to the entire facility.
The unique characteristics of vacuum sewers help provide greater control of the sewer system and therefore more control of the inmates.
“The overall cost savings along with ease of operation associated with vacuum sewers make it easier to manage the facility, ” Heaton says.
Steve Gibbs is a freelance writer in Memphis, Tenn. He has 25 years of experience covering wastewater
collection technologies.
Airvac