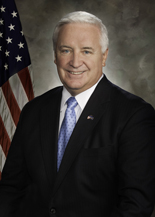 HARRISBURG, Pa. — Gov. Tom Corbett’s administration has scrapped plans for a $200 million prison construction project in Fayette County. Contractors had already been selected for the project.
Prison projects in Centre County and at the State Correctional Institute Graterford will proceed.
The proposed German Township prison would have housed 2,000 inmates and created 650 jobs in an area hit hard by the recession.
“The project has been canceled in the best interest of the commonwealth,” wrote Sheri L Phillips, acting secretary of the Department of General Services, in a letter addressed to Kevin Swain, vice president of Walsh Construction in Canonsburg, and Monte McKinney, vice president of Caddell Construction Co. in Montgomery, Ala.
Walsh and Caddell had been selected to work on the facility last fall after submitting a joint bid to Gov. Ed Rendell’s administration.
Acting Secretary of Corrections John Wetzel issued a statement yesterday saying the planned German Township prison is not “absolutely needed” because other prisons have space as a result of increased use of alternative sentencing programs for nonviolent offenders.
Wetzel said building a prison in western Pennsylvania “is not conducive to our current re-entry plans, where family connections play a large role in helping inmates return to a productive life in society.” The majority of inmates hail from the eastern part of the state.
Wetzel also said environmental and health concerns over the site of the project had contributed to the halt in construction. The site formerly served as a salvage yard.
Rep. Bill DeWeese, D-Waynesburg, whose district includes the site, disagreed with Wetzel, saying 2,155 inmates are housed in Michigan and Virginia due to a space shortage in Pennsylvania and that environmental testing had not revealed problems with the proposed construction site.
But corrections spokeswoman Sue McNaughton said existing space available in other prisons and additional beds now being installed in nine community correctional facilities have created enough space to transfer 1,100 prisoners incarcerated in Michigan back to Pennsylvania. Those inmates will be transferred by August, she said.
The state indicated it would not reimburse the two contractors for money they have spent on the project because no contracts were signed.
“No work, on-site or off-site, was authorized by the department,” Phillips wrote to Swain and McKinney. “The department is not liable for any costs that may have been incurred.”