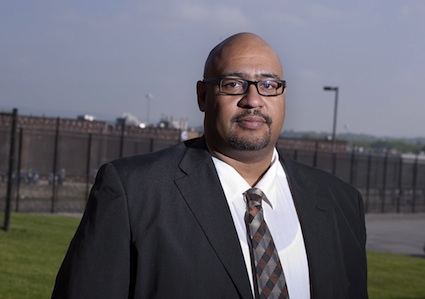 As the commonwealth’s second youngest corrections secretary in history, John E. Wetzel, at 42, brings an unassuming, no-nonsense attitude to his greatest challenge to date: revamping the state’s prison system. Elected by former state attorney general Gov. Tom Corbett (R), Wetzel candidly states that “population is one of our biggest challenges,” and concedes the number of inmates was rising but “we are certainly expecting to reverse that trend,” noting it’s been flat the last year. One projection called for its numbers to reach 58,000 by 2014 and Wetzel said he is working hard to address that.

As Wetzel looks to decrease the numbers of incarcerated folk through better serving their needs in the community, he pulls on his 22 years of experience in the only field he has ever worked — corrections. Starting as a CO in the county jail system he worked his way up to warden of the Franklin County Jail, a post he held for nine years before he interviewed, and ultimately landed, the position of state secretary. Although he was not confirmed until May 3, 2011, he took the office in January 2011.

Wetzel said all his experience had been in jails — “I worked my way up,” he said. During his tenure as warden at the Franklin County Jail in Chambersburg, Wetzel administered the construction of a state-of-the-art new jail, while implementing system-wide solutions to address crowding. Over 10 years, Wetzel reduced his population by 20 percent through the development of a day reporting center, job readiness program and an inmate case management system, which, in his words, “increased the corrections continuum and the sentencing options for judges and streamlined some of the court case processing.”

Pennsylvania is unique in how it manages its offenders. The jails are not sheriff run. Sheriffs are responsible for court security, inmate transport and civil service. There may be one or two jails, explained Wetzel, in real small counties, that are run by the sheriff.

It was also during the last decade that Wetzel was appointed by previous governor Edward Gene Rendell (D) to the Pennsylvania Board of Pardons to serve as the correctional expert for the state.

The Pennsylvania Department of Corrections (PADOC) is the state agency responsible for the confinement, care and rehabilitation of approximately 51,000 inmates at state correctional facilities funded by the Commonwealth of Pennsylvania. The agency, formed in 1829, has its headquarters in Lower Allen Township, near Camp Hill.

As of August 2011, the commonwealth has in operation 27 state correctional institutions or prisons, one motivational boot camp, one central training academy, 15 community corrections centers, and contracts with approximately 40 contractors across the state that provide transitional services.

Pennsylvania also has an eminent reputation in penology. The commonwealth was the birthplace of the penitentiary concept, also known as the Pennsylvania System. Eastern State Penitentiary, which opened in 1829 on a cherry orchard outside Philadelphia and was considered, at the time, to be “the world’s greatest penitentiary.” Known to historians as “the first true penitentiary,” Eastern State operated until 1970.

From 2010 until May 2011, Michigan’s Muskegon Correctional Facility (MCF) held Pennsylvania prisoners under contract. All 1,111 Pennsylvania inmates have now been returned. This comes on the heels of Michigan Gov. Jennifer Granholm’s plan to close eight prisons across her state including the medium-security MCF, some time between Aug. 1 and Nov. 30. A Michigan DOC official also confirmed that representatives of a private company, GEO Group, joined state corrections and Muskegon County officials for a tour and discussion at MCF. County and state officials were considering using at least a portion of the soon-to-be-closed state prison to house county jail inmates.

Pennsylvania, however, does not privatize its prisons. “We do privatize the health care, just not the core functions,” said Wetzel. “The COs are unionized in our state [as] the Pennsylvania State Corrections Officers Association.”

As of press time, Pennsylvania still had 1,002 of its inmates at the Green Rock Correctional Center in Chatham, Va. The DOC’s Office of Population Management is in charge of overseeing the agreements with Virginia. In late 2009, a spokesperson for the Pennsylvania DOC stated it would pay Virginia $62 per inmate per day and under the agreement, the “Old Dominion” state paid for the inmates’ transportation.

A life-long Pennsylvania resident, Wetzel’s background, up until he became secretary, was exclusively in the county jail system, but that is in no way to say he is unprepared for the responsibility of the state’s prison system.

During his 20 years in the field of corrections, Wetzel has presented statewide and nationally on several topics, including inmate labor issues, the mentally ill in corrections, working with inmates’ families, developing system-wide solutions to jail crowding, jail staffing and conducting vulnerability assessments. He also has had several national articles published on inmate labor, jail management and jail staffing.

Wetzel is the first one to point out that there is a real difference between a jail and a prison. “From the point of view of staffing, the assumptions are different, the physical protections systems are certainly more substantial in prisons than jails,” said Wetzel.

Wetzel understands the importance involved in the redesign at Graterford. Bids were due Aug. 31, but had been extended to Sept. 27, for the redesign, under design-build delivery, of two new facilities, which will continue to house up to 4,100 offenders at Graterford, aka SCI-Phoenix. The re-bid, intended to further reduce costs and best address the long-term needs of the prison population, includes augmentations to the security system, the addition of state’s first, self-contained female transitional facility on prison grounds, and a 100-bed capital case unit on the site, both of which were not in the original plans.

“We delayed the bid process while it was redesigned and now the bids are out,” said Wetzel in August. Of the total 2,668 female inmates in state prisons, he said, nearly 800 are from Philadelphia and surrounding counties.

The commonwealth has another capital unit but, as of press time, of the 213 people on death row, 106 are from Philadelphia and the capital unit is in the far western part of the state by Pittsburgh, which is far from the City of Brotherly Love. SCI- Graterford is only 31 miles west of Philly.

The execution chamber of the State of Pennsylvania is on the grounds of SCI-Rockview. Male death row inmates are housed in SCI-Greene and at Graterford. Female death row inmates are housed in SCI-Muncy. Wetzel said the special capital case unit at the new Graterford prison will result in reduced transportation costs associated with those offenders and court hearings. “Because of the extra security required, it costs 150 percent more to transport a capital case inmate than a general population inmate,” said Wetzel. “This housing unit will allow the DOC to house capital case inmates closer to Philadelphia, thus reducing our court-related transportation expenses.”

The Department of General Services (DGS) oversees procurement of goods and services, and is responsible for numerous core operations of state government, including its buildings and facilities.

Graterford is the site for two new prisons, presently named SCI Phoenix East and West. The replacement prison will be divided into sections, separating medium- and maximum-security inmates. Built in 1929 and sited on 1,730 acres, SCI-Graterford, Pennsylvania’s largest maximum-security prison, will be mothballed.

Hill International is the construction manager.

And although this project has had many incantations, and rebid three times, when asked if it was ever going to get off paper, Wetzel did not hesitate to say, “assuming the number comes in at what our budget number is, there is no doubt that it is going to get built.”
When the new administration came in, it reviewed every construction project in the state, explained Troy Thompson, spokesman at DGS. “German Township was cancelled because the new administration determined it was not needed, and that space, location and fiscal resources at SCI-Phoenix could be better utilized to meet current and future Department of Correction needs.”

Also on the horizon, and in the very preliminary stages, said Wetzel, are discussions about a joint venture for a community corrections center, or halfway house, with Lancaster County.

“About 28 percent of our new commits last year were nonviolent offenders; those are the people we are looking to divert,” said Wetzel. “We are just looking to make better decisions and if treatment in the community makes more sense for an individual, then let’s do that as oppose to send them here.”