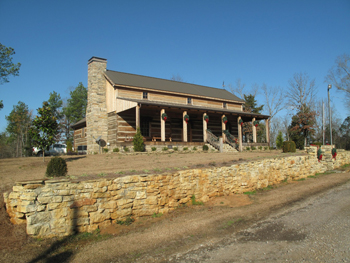 In one of those eager-rookie mistakes, he overreached, and for a couple of moments, Mitch Claborn’s career seemed scuttled before it really had begun. A 16-year-old dreaming of architecture, he was working in a high school co-op program at Willo Products in Decatur, Alabama.

“I was stocking the old blueprint machines with ammonia. This was before Xerox copiers and before anybody had even thought of auto-CAD,” Claborn recalls. “The founder of the company, Melvin Ozier, didn’t exactly draft with a heavy hand, so one time I cranked up the machine just as high as it would go. That thing went haywire, shredding and spitting out paper left and right, which I frantically tried to Scotch-tape together. He’d been working on that project for a month. He could’ve fired me on the spot then and there, but he didn’t. He was an understanding fellow.”

Claborn, whose uncle had been a detention equipment contractor at Decatur Iron and Steel, worked as a draftsman for Willo for another four years while attending Calhoun Community College, and then moved up through the ranks at Roanoke Iron and Bridge, Norment Security Group and Slate Security Systems, where he was vice president of operations.

“At the time I started in this industry, I thought, ‘Well, how many jails can I possibly build? Maybe there will be enough work for me to last for five years, and then I’ll move on to something else.’ I didn’t realize just how big the industry is, in terms of what there is to do, and, at the same time, how small it is, in the sense that most of us know each other. It’s an unusual niche market.”

In 1998, he struck out on his own to found Cornerstone Detention Products, specializing in the manufacture, distribution, and installation of detention equipment and products for the correctional industry at federal, state, and county levels, with much of the work geared toward private companies needing specialized design development for fast-track projects.

“I had been thinking about buying out Slate but then decided to launch my own company,” he says. The upstart company began in a home office above his garage, with managerial assistance from his wife, Monya.

“I gave it that generic name so it would be a corporate entity that wouldn’t be named after a family,” he says, “The old saying is that you shouldn’t go into business with family. Ironically, though, we’ve made it work.”

The oldest of three, Claborn brought his brothers, Shannon and Stephen, on board. “Stephen, my youngest brother, worked at an old-fashioned school desk, the kind where you store your books under your seat. That’s how modest we were starting out,” Mitch says.

Cornerstone now employs 45 permanent workers and usually keeps 150 others on the payroll, and, for three years, Inc. 500 has ranked it among the “Fastest Growing Private Companies.” In 2011, it was named Alabama’s sixth largest subcontractor. The Arizona Subcontractors Association awarded its “Best Design Build Project” designation for Cornerstone’s work on the United States Penitentiary and Federal Prison Camp in Tucson, Ariz. The company, based in Tanner, Ala., just outside Huntsville, also maintains offices in San Antonio and Toronto, where it is finishing up the Toronto South Detention Center, a 2,000-bed, $20 million-plus, public-private project.

“The demographic shifts in population and in manufacturing from North to South, combined with the trend toward privatization, which is really gaining ground here — and the strength of the steel industry make it cheaper and easier to operate in the South,” Claborn says. “Those are a few factors in how this industry has grown here over the years, and we’ve grown along with it.”

Cornerstone also is distinguished by the outdoorsy, Southern hospitality extended to clients with Stonehill, Claborn’s hunting preserve, which has several cabins, an outdoor pavilion and a stock of whitetail deer, turkey and bass. “We can give them serenity,” he says, with a drawl.

Today, Stephen Claborn serves as the sales manager for the Institutional Division, coordinating facility contracts, renovations, and marketing and facility sales for institutional supplies, while the clan’s middle brother, who started in that division, has moved into the construction side of the company, where he oversees estimating and business development.

“I was working in lumber sales before this, so I shifted from wood to steel,” Shannon Claborn says. “I’d been playing golf with the detention guys for years with Mitch, so I already knew them all when I joined Cornerstone.

There’s a deep well of expertise in our company, which I think is key because, even though the industry has made so many advances, there are still things that are done the way they were 40 years ago. And I always say the detention industry is like the mob — once you’re in, you never get out.”

Adds Mitch, “One thing I love about this business is the characters — especially the older ones. Whew…!”
Recently, the rising generation of Claborns has joined the company. “We are probably among the younger minds in the industry,” says Mitch’s son, Heath Claborn, who handles business development and marketing in the Canada office, while his sister, Heather Claborn Lang, works as an estimator in Alabama. “We’ve been privileged to sit at the feet of the great minds that have shaped this industry for the past 30 years.”

In fact, Lang followed her father’s example by participating in her high school’s co-op program, clocking in at the company’s Institutional Sales Division. “I was an athlete, and I have this very competitive streak — I hate to lose! — so I enjoy a hectic day of seeing how numbers fall,” she says.

Moreover, she adds, “We have a good chemistry. I like working with my family and at Cornerstone, everybody is like family, even if they’re not related.”

Cornerstone’s motto is “Building with knowledge and succeeding through integrity,” Heath says. “Sure, there are new products and new concepts that have emerged within our company. We have adopted the latest in technology in order to help provide a more quality service to our clients.

Concepts in design change from time to time and thought processes and approaches seem to always cycle. However, upholding ethical values is very important to us, and my family is proud of that standard.”

As for the company’s founder and CEO, his professional calling has evolved in subtle ways since he experienced that moment of grace after shredding Mr. Ozier’s blueprints.

“When I first started this, I thought of it as doing society a favor by giving it a place to put the bad guys,” Mitch Claborn says. “Now, I derive a lot of satisfaction from the construction part of it, from the complexities and unique challenges of each job. You start with a piece of paper, and end up with a building. At the end of the day, I feel sort of like a little boy with building blocks.”