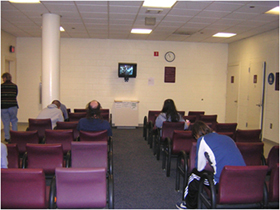 This research project, sponsored in part by the Academy of Architecture for Justice (AAJ) Research Committee and the National Institute of Corrections, grew out of an exploration of potential applications of neuroscience concepts and methods to help understand the ways correctional environments affect inmates and staff.

Discussion of the Problem/Situation
In the intake area, new arrestees arrive, sometimes for their first experience in jail. They may be under the influence of drugs and/or alcohol, mentally ill, and emotionally unstable or upset. The early hours of confinement are known to be among the most stressful for inmates and are the time when suicide attempts are most common. Many inmates also represent an unknown entity to the jail staff who do not know what type of behavior to anticipate upon admission. The result is a highly stressful situation for both groups.

Intended to improve this situation and reduce stress, the Sonoma County, Calif., Main Adult Detention Facility (MADF) has an “open booking” area, where inmates experience a “waiting room” type of setting and are booked across an open counter. However, the current study assumes that even open booking 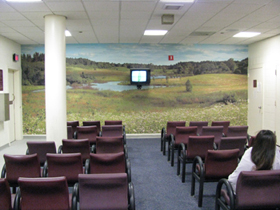 settings may not be optimal in terms of its environmental design features and that targeted improvements could have the effect of further reducing stress.

The study’s research hypothesis can be stated as: Views of nature, introduced into a jail booking area, will result in a measurable reduction in levels of stress experienced by inmates and staff, compared to the situation prior to the intervention.

Views of Nature
The existing jail could not have windows cut into its walls, so two options remained for consideration. One was to place live indoor plants in the area. Despite potential security considerations; this option was not rejected by jail management. Rather, it was determined by the research team to be less effective, based on unpromising results of other studies. Instead, the team decided to build on the success of other studies that had found stress to be measurably reduced by the introduction of large-scale photo murals.

Measuring Stress
Several factors contributed to the selection of stress measures. First, given the neuroscience orientation of the study, there was a preference for measures that reflected, even indirectly, changes in neurological activity. Heart rate (inter-beat intervals) variability is a reliable measure of stress and is accomplished by wearing a monitor consisting of a transmitter on a band around the chest and a wristwatch-like receiver/recorder. Measuring heart rate was seen as minimally intrusive and could be managed by jail staff without a member of the research team present. In addition, sophisticated analysis of heart rate data was available from an experienced university neuroscience research lab at Ohio State University that had used the technique in other studies. The heart rate monitoring would be supplemented by other measures of stress including the backward digit span, which tests mental agility and fatigue, and a questionnaire in which respondents give their subjective assessment of their stress level. Archival data on inmate incidents in the booking area was also desired, but turned out to be unavailable.

Research Design and Results
The research design entailed gathering data before and after the mural was installed and measuring any changes that might be experienced by individual staff members. A single intervention was to be made in the booking area at Sonoma County’s MADF, consisting of the installation of large photo murals presenting views of a natural scene. In order to optimize the likelihood of finding an impact, the selected mural was one used in prior studies in health care facility studies that found measurably reduced stress. All staff, on all shifts were included for a total of 12. They wore heart rate monitors for a short period prior to starting their shift to establish their baseline, continued throughout their shift, and for a short period afterwards.

The same staff was measured, in the same way, following installation of the mural (after a period of six weeks for them to become acclimatized). Staff was told that the research was studying their levels of stress, but was not told of the expected link between the mural and stress reduction.

Results of the data analysis demonstrated that, after installation of the mural, intake officers’ heart rate was significantly lower at the beginning of the shift; the rate of increase of heart rate was significantly less from the beginning to the end of shift; and there was a significant increase in “log power,” indicating inhibition of heart rate. The rate of log power increase is statistically significant and is consistent with a lower heart rate and less stress. The data is suggestive of a pattern that is consistent with reduced stress at the end of the day after the exposure to the mural intervention.

So What Does This All Mean?
These results have potential importance not only for theory and their contribution to the empirical base of evidence concerning human response to nature views, but also for design and practice in correctional settings. In effect, they suggest giving strong consideration to providing views of nature.

Further, the study shows that where views of real natural scenes cannot be provided — such as in existing buildings — positive effects may be obtained with large murals, which are relatively simple to install and inexpensive. It is worth noting that similar findings in the health care field have changed the design of health care settings over the past decade, as part of the evidence-based design movement.

It is important, however, to understand the limitations of the present study. This was a limited intervention in a single setting and data was collected from a relatively small number of subjects, limiting the statistical power of some tests. Moreover, we were only able to study the impacts on correctional officers. Future research would be very valuable in verifying these findings, determining the mechanisms of the effects, assessing their effects on inmates, and extending the number of subjects.

Current AAJ Research projects include:
1. Development of a database, which includes user-friendly summaries of existing research in corrections/detention, law enforcement and courthouse design. The committee is working with Texas Tech University, and the first 10 research summaries will be posted on the AAJ website when complete.

2. Creation of a database of Justice Facilities Review projects as searchable content. AAJ Scholar Erin Costino has been working with the committee and National AIA on this task.