CellSense, manufactured by Metrasens, a manufacturer of metal detection systems with offices in Illinois and the United Kingdom, allows for the quick and easy scanning of large numbers of inmates. It provides screening without disrupting the routines and schedules at the correctional facility.

“CellSense is the world’s most portable full-body scanner that detects all cell phones, even if they are powered off, as well as other contraband items such as shanks, small blades, etc.,” says Andy Best, sales manager, security products at Metrasens Ltd. in Malvern, U.K. “Its versatility and reliability means it is ideal for use in all types of correctional facilities.”

Though Best says for commercial reasons he is not at liberty to discuss in detail how CellSense works, he does say the technology was first developed for military use for the detection of submarines and both sea and land mines.

“CellSense was introduced into the U.S. in 2010, when extensive trials were undertaken in state prisons with the invaluable cooperation of prison management and operational officers. This led to product modifications and enhancements, as well as providing a crucial understanding of optimum deployment methods.”

Key Features
Able to detect all cellphones — even if concealed in a body cavity — key features of CellSense include portability, immediate deployment, simplicity in operation, intuitive display, one-person set up and more. Operational benefits include being able to scan a full body with a single walk-by and scanning large numbers of prisoners quickly. 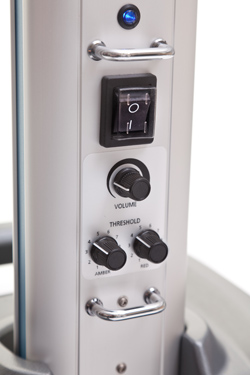 Best says CellSense is proving highly popular and is being effectively utilized in numerous correctional facilities across the U.S. in such states as Georgia, Mississippi, North Carolina, Arkansas, Tennessee, New Jersey, California, Arizona and others. However, because CellSense is often used covertly, many corrections staff will only speak anonymously about its use. It was designed for use indoors and outdoors and is showerproof. With an optional weather cover, it can even be operated in heavy rain.

“The strengths of CellSense are its capability to find metals and magnetic materials that traditional detectors do not detect,” says one Texas Department of Criminal Justice operations manager.

“All staff was impressed with the system,” says a prison warden in Florida. “The device was used to scan inmates, as well as laundry bags, mattresses and incoming mail. This resulted in locating cellphones, battery packs, razor blades, radios and watches, among other items.”

Quick to assemble as either a portable or wall-mounted unit, CellSense can typically be deployed without any warning. It can screen through concrete, brick, wooden or plasterboard walls. There are also no health or safety concerns and it is completely safe for those inmates with pacemakers or who are pregnant. Touted as a cost-saving measure, up to 40 individuals per minute can be scanned.

“The CellSense detectors worked very well for clearing a lot of inmates in a short time with a minimal amount of staff,” says one California prison officer. “Previously it would take 10 staff almost an hour to clear a building with 200 inmates using hand wands. With five staff, we were able to clear a building with 200 inmates in about 40 minutes.”
The Georgia Department of Corrections, which first purchased CellSense in October 2011, is another fan of the product.

“These devices were purchased to assist in our overall mission of maintaining safe and secure facilities,” says Gwendolyn Hogan, information coordinator for the Georgia DOC. “As of July 20, 2012, the department is equipped with CellSense devices at all facilities.”
Specifications and Cost

Adds Best, “CellSense costs less than $10,000 and comes with a three-year warranty with full customer training and national support provided by U.S.-based technicians.”