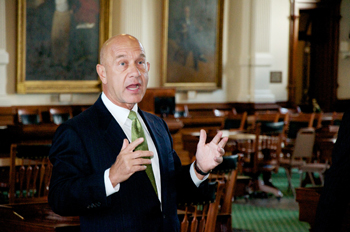 The states profiled in the report show significant declines in their three-year recidivism rates based on data tracking individuals released from prison in 2005 and 2007. Texas and Ohio reported reductions of 11 percent, while the Kansas rate fell by 15 percent and Michigan’s rate dropped by 18 percent. Incorporating data through 2010 (and in some cases, through 2011), the report provides the most recent multi-state information available on recidivism.

Republican and Democratic leaders in Congress, and the U.S. Department of Justice and other cabinet agencies, have been instrumental in creating a climate that has propelled the work of state and local governments in reducing recidivism. Most notably, under the Second Chance Act, landmark legislation passed with overwhelming bipartisan support, state and local governments and their community-based partners have been able to seed new reentry initiatives and expand existing efforts.

U.S. Senator Rob Portman (R-Ohio), a co-author of the Second Chance Act, applauded the states, including Ohio, for their accomplishments. “Second Chance Act programs, in collaboration with faith-based and community organizations and local reentry coalitions, have a proven record of helping inmates turn their lives around, and I applaud their continued good efforts to reduce recidivism. Encouraging people released from prison to become productive members of society not only strengthens communities, but also reduces the burden on taxpayers who shoulder the costs associated with incarceration.”

The brief, “States Report Reductions in Recidivism,” highlights strategies that leaders in several states credit with helping drive down recidivism:

In Ohio, state policymakers standardized the use of a validated risk assessment instrument to focus limited treatment and supervision resources on those individuals assessed at the highest risk for reoffending.

In Kansas, state leaders awarded performance-based grants to community corrections agencies, partnered with local communities where recidivism rates were highest to improve post-release supervision, and enhanced housing and workforce development services to better meet the needs of people coming out of prison.

Michigan officials invested heavily in the state’s Prisoner Reentry Program, prioritizing funding for housing, employment, and other transition support services in order to provide the most effective community-based programming for released individuals.

Adam Gelb, director of the Pew Center on the States’ Public Safety Performance Project, said: “Reducing recidivism can produce a big payoff: If states across the country could reduce their recidivism rates by just 10 percent, they could save more than half a billion dollars combined in one year alone in averted prison costs.”

Mississippi Department of Corrections Commissioner Chris Epps said: “Corrections administrators know that reducing recidivism is a goal that can be accomplished only in partnership with other agencies and community-based organizations. At the same time, we recognize that governors, legislators, and the public are holding departments of correction accountable for their recidivism rates. The data highlighted in this brief demonstrate that we in corrections are standing up to meet this responsibility and are getting results.”

Denise E. O’Donnell, Director, Bureau of Justice Assistance (BJA) in the U.S. Department of Justice, congratulated the states highlighted in the brief. “At BJA, we’re supporting states who are committed to taking a data-driven approach to lowering re-offense rates of people released from prison and jail. Later this week, we’ll be announcing major awards to a select group of states that are setting recidivism reduction targets, and like the states highlighted today, are using evidence-based approaches to meet the goals they set.”

The Council of State Governments Justice Center is a national nonprofit organization that serves policymakers at the local, state, and federal levels from all branches of government. The Justice Center provides nonpartisan advice and consensus-driven strategies — informed by available evidence — to increase public safety and strengthen communities.