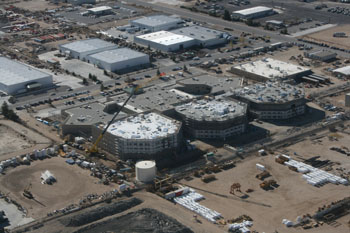 The $126 million project, scheduled for completion in December, broke ground in December 2010 with the intention of building four housing units. But because realignment began in 2011, the design team and jail administrators opted for full build out to accommodate the pending population growth in the 706-bed maximum-security jail. Designed by San Francisco-based HOK, with offices also in Los Angeles, and constructed by Spokane-based Lydig Construction, the project developed different standards as time and legislation transformed.

“This was one of the first large projects that was being funded by AB 900 funding and the state hadn’t really worked out their system,” said April Lenkey, project manager at HOK. “We were kind of a guinea pig. It was a bit unpredictable as far as what the requirements were.”

The first design had called for the construction of four housing units with room for an optional two housing unit expansion. But with an increasing population due to realignment, the jail will open with the two additional housing units.

“Adding more beds and increasing our design to fit the full capacity of what that site could handle is one way that they will increase their capacity and help ease the pressure of the realignment act,” Lenkey said.

After initial designs were completed, the county waited for two years in order to receive state funding for the project. During that interim period, building codes had been updated, causing some complications in the project, Lenkey said.

“The original design was based on the 2001 California building code and during the interim when the project was on hold we had to upgrade the entire design to the 2007 building code,” Lenkey said. “That’s probably been our biggest challenge in design and construction.”

The project also endured some pressing political pressure as former Governor Arnold Schwarzenegger wished to be at the groundbreaking ceremony before going out of office in January 2011.

“There was huge political pressure to get all the approvals and award the contract to the contractor and get the project out to bid in time before he went out of office,” Lenkey said.

The speed to ready the project for groundbreaking was sometimes stressful, Lenkey said. The state fire marshals reviews and turn arounds took place one week apart and over a holiday weekend, she said.

The new detention will also allow for greater flexibility in inmate classification, said Captain Jon Marhoefer, as realignment has also called for county correctional facilities to house inmates with longer average sentences. According to Marhoefer, the detention center must now accommodate inmates serving sentences over 10 years, whereas before realignment the average length of stay was just 22 days.

“We now have the ability to house higher security inmates,” Marhoefer said.

Updated programming can be provided to any classification of inmate without having to move them out of their housing unit. Because programming is moveable, less security is needed and inmates can participate in the facility’s mental health counseling, cognitive skills programs and substance abuse programs without potential for hazard.

“We knew realignment was out there and programming was going to be a key component of that,” Marhoefer said.

Other security updates include the conversion of hard panel security to touch screen security and additional security electronics.

“It’s key to preventing inmate and staff assaults,” Marhoefer said. “All security electronics are easy to use and provide a high level of management.”